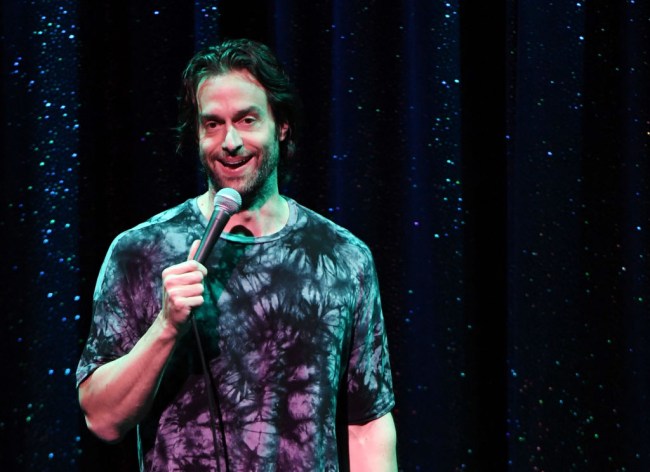 If you’re bored, comedian Chris D’Elia has a great new special on Netflix. You should watch it! It’s called No Pain, in which D’Elia  some fundamental struggles with the human condition – IE: The evil things dolphins do to people and telling people you don’t do drugs.

After you watch that, check out D’Elia’s recent appearance on the April 15 episode of the Joe Rogan Experience is worth the three hours.

In the interview, D’Elia tells the story about how he had an accident on the way to meet one of his celebrity idols, Eminem.

But first, the backstory.

In 2018, D’Elia went viral with his impression of Eminem rapping.

A couple months later, Eminem asked D’Elia to do a rap battle, thanks to an assist from Logic when D’Elia starred the music video for “Homocide”

D’Elia tells Rogan that he’s been an Eminem “stan” his entire life, so all of this is during a once-in-a-lifetime opportunity to meet a hero.

Except there was a problem: While in Detroit, on the way to Eminem’s mansion in a car, his bowels started to rumble.

D’Elia continues: “There are two ways he can go. One way he can go is to a hospital. The other way is into town. In my head I’m like, ‘it sucks but we got to go to the hospital.’ But the whole time I got to go.”

The driver took a turn towards town instead of the hospital, and that’s when it happened:

“So I say to the guy, ‘Hey man, pull over!’ There was Kleenex, so I grabbed them and ran into someone’s yard. I found trees, thank God…. It all came out quick!”

Mid-bowel movement, with his pants around his ankles, D’Elia had to freak out on his driver, who apparently started to film this embarrassing moment from afar.

“I’m sorry I littered…. but I left the Kleenex there.  What else am I gonna do? It was a lot. Somebody’s gonna think there was a bobcat in their yard.”

Afterwards, they continued to Eminem’s house, where the rapper never knew the messy situation that transpired on the way to his house.

Hear him tell the story to Joe Rogan:

This isn’t the only A+ story D’Elia has told about meeting Eminem. He talked about it at length on his own show shortly after it happened last summer.