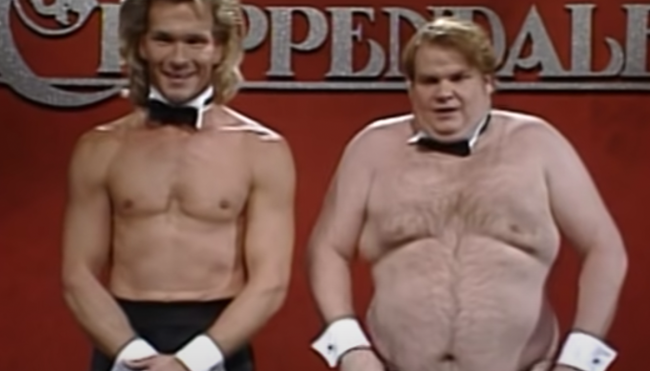 In 1990, Saturday Night Live introduced the world to the incredible comedic stylings of Chris Farley, who quickly established himself as one of the most hilarious people to ever grace Studio 8H with their presence.

Farley left SNL in 1995 after five seasons on the show and took his talents to Hollywood, but he tragically died of an overdose following a long struggle with substance abuse a couple of years later at the age of 33. However, he left an indelible mark on comedy over the course of a career that came to an end far too soon thanks in no small part to how far he was willing to go for the sake of a joke.

Farley was a master of physical comedy who had no problem hurling himself through a table or ripping off his shirt in the presence of a slightly more sculpted Patrick Swayze in order to get a laugh.

Farley was the kind of guy who didn’t really have much of an off switch, as he was always on the hunt for the opportunity to amuse even when the cameras were off—including the one he took full advantage of while at a strip club in 1995.

Earlier this week, Tom Arnold chatted with Howard Stern and shared a hilarious story about what unfolded at a bachelor party prior to the wedding where Farley served as his best man. Arnold recalled what happened after a crew that also included David Spade made the trip to Scores, saying the big man mysteriously disappeared inside the strip club only to make his grand return in absolutely vintage fashion by reappearing on stage totally naked.

The entire group got the boot as a result, but I think they’d all agree it was worth it.