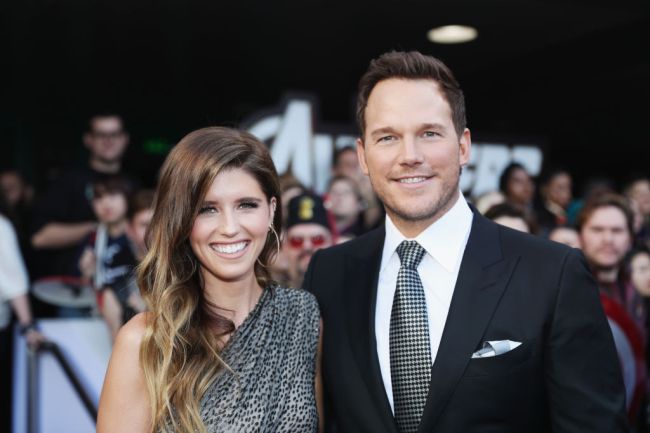 There are people on Twitter dragging Chris Pratt for an Instagram post — dedicated to his wife Katherine Schwarzenegger —  that includes a reference to Schwarzenegger “giving” him a “gorgeous healthy daughter.” Some on social media are taking the caption as a slight against Pratt’s ex-wife Anna Faris and their pair’s son nine-year-old son Jack, who was born two months prematurely and has suffered from health complications as a result.

“Guys. For real. Look how she’s looking at me! I mean. Find you somebody that looks at you like that!! You know!? We met in church. She’s given me an amazing life, a gorgeous healthy daughter, she chews so loudly that sometimes I put in my ear buds to drown it out, but that’s love!” Pratt wrote on Instagram.

“She helps me with everything. In return, periodically, I open a jar of pickles. That’s the trade. Her heart is pure and it belongs to me. My greatest treasure right next to my Ken Griffey Jr Upper Deck Rookie card. Which if you know, you know is saying a lot. It’s her birthday in about 6 weeks. So if I don’t get her anything, I’ll tell her to look back on this post. Love you honey.”

The real political divide in america can be summed up b whether u think this post from Chris Pratt comes off as a) sweet snd normal or b) Cringe and insane pic.twitter.com/Ibp0jt30Jd

"Healthy Daughter" when the son he had with Anna Faris was a preemie and has serious health problems makes me want to fight Crisp Rat even more. https://t.co/ANJhwmI1dL

What a sickening jab at Anna faris. What a disgusting little blood sucking tick Chris Pratt is pic.twitter.com/L5edL5mmxt

wtf is this a diss on Anna Faris for their child being born premature?

the healthy daughter line is pretty bad when you remember that he left Anna Faris and their son that was born w a disability https://t.co/cKpw9Fycs5

I PRAY Anna Faris writes a blistering tell all memoir that will drag this man into HELL https://t.co/VA3V4LOAcI

“Healthy daughter” wow my condolences to his son with Anna Faris who has had a hard life with medical issues. Wowowow this fucking guy. https://t.co/FEZSrSP2tD

Pratt, 42, and his wife Katherine Schwarzenegger, 31, got married in June 2019 and share one child together, who was born in August 2020. Pratt was previously married to fellow actor Anna Faris from 2009 to 2018 (the pair met while filming the comedy Take Me Home Tonight, with their son Jack being born in August 2012.

RELATED: Internet Reacts To Chris Pratt Being Tapped To Voice Garfield, Yet Another Iconic Italian Character (Sort Of)