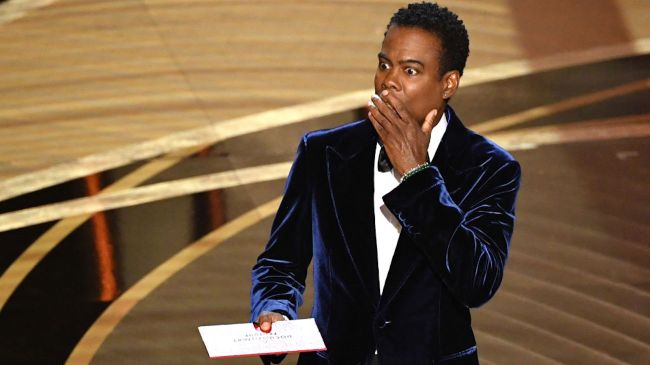 Chris Rock, the man on the receiving end of The Slap Heard ‘Round The World, made his first public comments about getting smacked by Will Smith at a comedy show in Boston on Wednesday night.

Appearing at a previously scheduled show in Boston, Rock addressed Smith’s swing at him, according to Variety, which has obtained audio of the 57-year-old’s comments.

Chris Rock just addressed the Will Smith #Oscars slap for the first time during a sold-out stand-up show in Boston. https://t.co/Keka0MVhSd

Listen to the audio 👇 pic.twitter.com/TuqE8AHs6C

“How was your weekend?” Rock began, reportedly drawing a “wave” of laughter. “I don’t have a bunch of shit about what happened, so if you came to hear that, I have a whole show I wrote before this weekend. I’m still kind of processing what happened. So, at some point I’ll talk about that shit. And it will be serious and funny.”

Rock, who was presenting the award for Best Documentary, made an ad-libbed joke about Jada Pinkett Smith, saying that he’s looking forward to seeing her in the G.I. Jane sequel in reference to her shaved head. Pinket Smith suffers from a hair loss condition known as alopecia and clearly took offense to the joke, which prompted Will Smith to walk on stage and smack Chris Rock in the face.

Despite striking Rock, Smith returned to his seat where he remained until he accepted the award for Best Actor for his performance in King Richard. During his acceptance speech, Smith — who reportedly refused to exit the ceremony at the Academy’s request — said that “love will make you do crazy things.”

While Smith has since apologized to Rock, the Academy, and a bevy of other people, the Academy still intends to take “appropriate action” in regards to the actor.