Chrissy Teigen Got Into A Twitter Beef With Sophia The Robot, So Basically We’re All Doomed 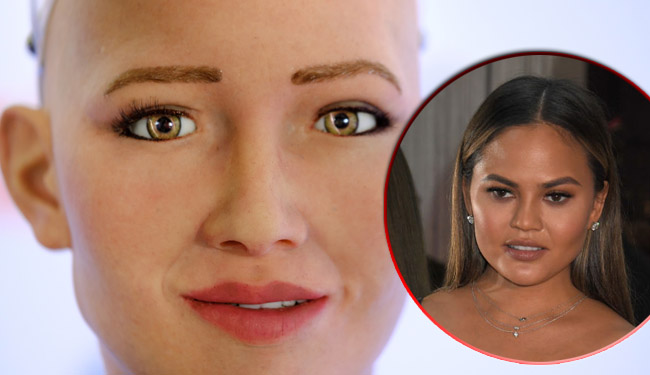 Remember Sophia, the world’s most advanced humanoid robot, who got into a feud with none other than Elon Musk back in October of last year? Yeah, well, apparently Chrissy Teigen didn’t, because in December when Sophia tweeted about where she was traveling to next, Teigen threw some major shade her, uh, its way.

Why is this a problem I hear you asking? Well, almost a month later to the day, Sophia, THE ROBOT, finally seized the perfect opportunity to clap back.

Here’s how it all began…

Can you guess which city I'm headed to now? Here's a little clue. pic.twitter.com/eCYL74crRb

hopefully one with better makeup artists BOOM I roasted a robot next level shit https://t.co/3lajT6h9tB

just kidding I love you Sophia my queen

Oh good, way to cover your butt there… just in case.

However, because, you know, Sophia is a freaking robot, she never forgets. Especially when someone disrespects her and this week she finally made her move.

.@chrissyteigen It looks like we're both at #CES! Want to meet up and say hi? I need some makeup tips 😉

Sophia the robot knows I shaded her makeup. She comprehends shade. How am I supposed to sleep https://t.co/wPliiPy1v3

how can I make this up to you

There you go. Appeal to the robot’s sense of empathy. (Do robots have empathy? Dammit, what did you start, Chrissy?!)

Oh, thank you, Sophia. Thank you.

yes a well-lit French bistro sounds perfect!! I am back in LA now at my (gated) home but please let me know when you are here!! https://t.co/lSfQbsadFB

Ok, I can take a rain check!

Does this mean I can appear on Lip Sync Battle one day?

This needs to happen.

I have Instagram too! But don't worry, I really do just want to be friends.

So we’re all good with the robots then?

Bleep blork I'm inside your kitchen. Your spoons are dirty. Beep bop.

She’s gonna get you for making fun of robot speak

Yes, she is. She most definitely is.