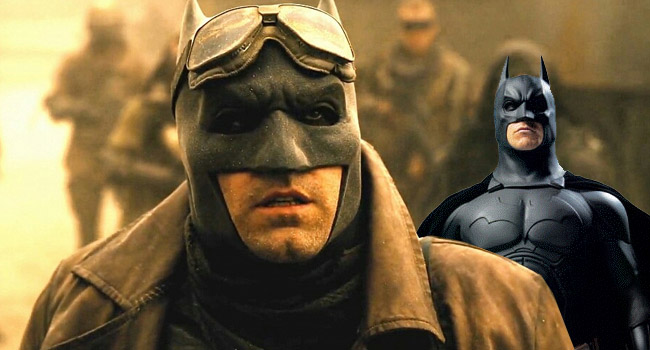 I don’t know about you, but if I were one of the lucky men to don the cape and cowl to play Batman in a blockbuster movie I would be curious to see how the guy who took over the role after me did in the movies that followed. But hey, that’s just me.

I mean, I am sure Michael Keaton had a nice chuckle when he watched Val Kilmer and George Clooney attempt to play Batman after he did. And I would also think that after the way Christian Bale absolutely nailed Bruce Wayne’s alter ego he too would be interested in seeing Ben Affleck’s take on it.

My latter assumption, however, would be dead wrong. After two movies, Batman V. Superman and Justice League, Bale still hasn’t seen the Batfleck in action on the silver screen.

Why? Well, his reasoning is about as odd as he is.

Speaking on the “Happy Sad Confused” podcast (via /Film), Bale let us in on a couple of secrets…

“I have not [seen Ben Affleck’s Batman]. Yes, I’m interested [in seeing it], my son seemed like he was really interested, but then I realized he just wanted to see the trailer and that was it. I tend to go see films that [my kids] want to see. I have to confess I’m not a huge superhero film fan. People seem surprised at that, I don’t know why. I’ve not seen any of the Avengers films or any of those films at all. I hear they’re very good, but I’m quite happy just hearing they’re very good.”

Ummm… okay, I guess I kind of get that, but at least Bale is a big Batman fan, right? You know, since he has thus far done the best job in the character’s decades-long cinematic history. What’s that? He’s not? Oh man…

“I didn’t have knowledge of the graphic novels or the comics. I wasn’t an avid fan, but when I had seen the Adam West series, I really enjoyed it. I had seen some of the other films. I was ambivalent about them. It was Frank Miller’s Batman: Year One that was such a surprise to me.”

He’s seen the Adam West series. Really? This one… this is the one he watched…

Okay, so, Bale played one of the most iconic superheroes ever in, not one, but three films and he’s not a fan of superhero movies. Why do I feel such disappointment in learning that?

Oh well, perhaps it’s for the best that Bale hasn’t caught any glimpses of Affleck in the role. I’d hate to think about how pissed off it would make him.