First-Look At Ghoulish Christian Bale In ‘Thor: Love and Thunder’ Simply Must Be Seen To Be Believed 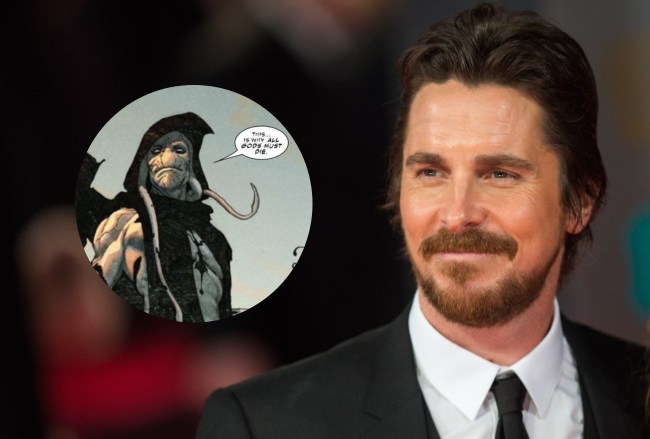 The power of Taika Waititi is truly something special. How the hell else do you explain getting Academy Award winner Christian Bale to sign on to play the villain in your splashy comic book movie? My dude couldn’t even be convinced to make another Batman movie to the tune of $50 million and yet here he is starring as a character named Gorr the God Butcher in Thor: Love and Thunder, and it certainly ain’t because he grew up a fan of the character, as he didn’t make his debut until 2012’s Thor: God of Thunder #2. Granted, while I’m sure Marvel is paying him with a pretty penny for his services, reason suggests Bale signed on because he believes in Waititi’s vision. And boy, based on this first-look, what a vision it is:

The first look at Christian Bale as Gorr the God Butcher in Thor: Love and Thunder!

Filming has resumed in Malibu

To get Christian Bale to dress up like THAT is truly a filmmaking miracle. You can now guarantee that Gorr is going to raise all sorts of hell in Thor: Love and Thunder, as there’s simply no way Bale would sign up to play such an absurd-looking creature if he didn’t have an incredible arc.

Regardless of Bale’s insane-looking Gorr, Thor: Love and Thunder was already shaping up to be one of the biggest MCU films of all time. Not only is Christian Bale joining as Gorr, but Academy Award winner Natalie Portman is returning as Jane Foster, who’s set to become Mighty Thor in this film. They’ll be joined by Chris Hemsworth (obviously), Tessa Thompson as Valkyrie, Chris Pratt as Star-Lord, Dave Bautista as Drax the Destroyer, Pom Klementieff as Mantis, Karen Gillan as Nebula, Russell Crowe as Zeus, and Jeff Goldblum as Grandmaster. Matt Damon and Melissa McCarthy are also set to pop up in cameo roles. STACKED. Plus, Thor is the first-ever MCU character to get a fourth solo film. All those factors combined make this my most highly-anticipated Phase 4 film.