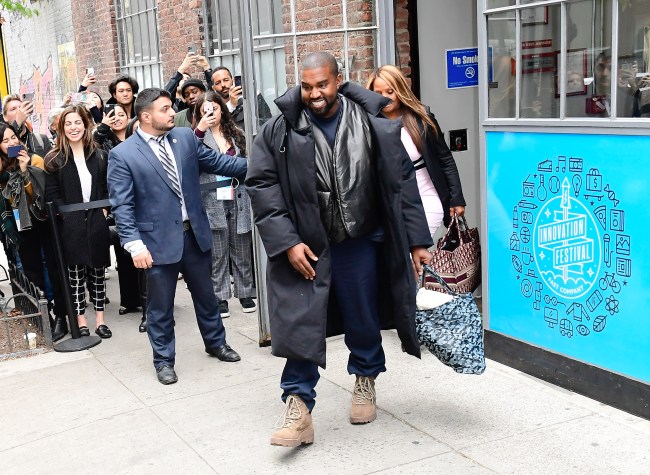 Kanye West always has a plan for the future. For his future, your future, my future, the future of wolves, the planet, and the White House. Or at least that’s what Kanye West wants everybody to think.

As far as Kanye’s future goes, the 42-year-old rapper/mogul/reality TV star discussed it this week at Fast Company’s Innovation Festival. He talked about legally changing his name and taking over the White House within the next decade.

Kanye took exception to the crowd laughing at him when he said he plans to run for President of the United States of America in 2024. There was a time in very recent history when the thought of Kanye West having any shot in hell at even getting on an election ballot was inconceivable but given that the White House is currently occupied by a former Reality TV star/real estate tycoon with zero political experience prior to winning the Presidential election, it’s not so far-fetched anymore to think that Kanye West could win, is it?

“When I run for president in 2024 —” West said, to laughter from the audience. “What y’all laughing at?”

West said that if he were elected president, he would “create so many jobs.”

The portion of Kanye’s discussion that turned a lot of heads was the part where he talked in earnest about legally changing his name to ‘Christian Genius Billionaire Kanye West’ to make some sort of point about being a billionaire that I think might be lost on me. To be honest, it’s not really clear at all to me what point Kanye West is trying to make here but Kanye’s a self-proclaimed genius so I’m sure there’s some higher meaning.

What’s interesting about this quote is Forbes estimates Kanye West’s net worth is only $240 million, not even a full quarter-billionaire. Kanye seems to think they have it wrong despite Forbes being able to accurately track the net worth of pretty much every celebrity, rapper, actor, CEO, founder, entrepreneur, and wealthy person on the planet:

According to People, the dad-of-four joked: ‘When people say it’s crass to call yourself a billionaire, I say I might legally change my name to Christian Genius Billionaire Kanye West for a year until y’all understand exactly what it is.

‘It will be on the license plate.’ (via Metro)

As you can imagine, most news outlets jumped onto this quote about Yeezy wanting to change his name to Christian Genius Billionaire Kanye West over the news about him running for President of the United States of America. Probably because that name’s a complete mouthful and Kanye’s crazy enough to do it.

There were A LOT of reactions on Twitter (find me at @casspa) to Ye’s proposed legal name change to Christian Genius Billionaire Kanye West:

This guy needs to be a bit more self confident. It's such a shame to see people putting themselves down all the time

It's no nut November, but this boi keeps going nuts by the day

He should change it to Gay Fish pic.twitter.com/xdibduDOCB

This man is actually so boring it is funny 😂

Medication only works if you take it

Some were quick to point out that Kanye’s pledge to legally change his name was tongue-in-cheek based on the video clip below but Kanye certifiably crazy. He’d do it. I don’t care what any level headed person thinks about this. You KNOW he’d do it just to prove a point.

CONTEXT: It was tongue in cheek. (Ye talks about his journey from being in debt to being a billionaire, and pokes at how media thinks it’s crass to call yourself one) pic.twitter.com/OFmyR0k0m4

Will he do it? I guess it will come down to whether or not Forbes continues to quote his net worth at $240 million and/or if anyone on his media relations team can talk him out of the massive headache it would case if he were to actually legally change his name to something that elaborate, all just to prove a point.