Kid Tries To Catch Santa With Hidden Camera But Gets Dog Poop Instead, Plus 12 Other Viral Christmas Videos 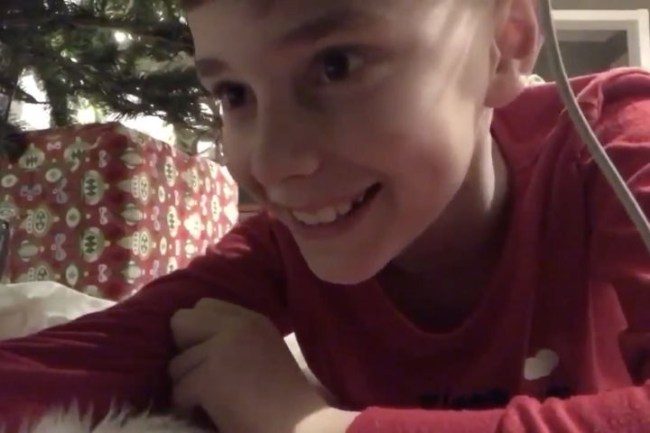 Christmastime is special because families are together, the spiked eggnog is flowing, and everyone is generally in a jolly and giving mood. This sets the stage for tremendous viral videos from hilarious to heartwarming to heartbreaking. We rounded up some of the best viral videos from Christmas 2018 for you to keep the festive feeling alive for a little longer.

One inquisitive young boy decided that he was going to catch Santa Claus in the act. So he stealthfully set up his iPad under the Christmas tree to catch the moment Santa came down the chimney with his bag of goodies. The kid got sh*t. Literally.

The video didn’t catch Santa delivering presents but it did solve the mystery of who took a dump under the tree. The iPad camera caught the exact moment that the family’s chihuahua took a liquidy, soft serve poo under the tree. The chihuahua’s owners may want to consider switching from wet to dry dog food.

so my brother left his ipad recording under the christmas tree so he could catch santa and….. this is what he actually caught pic.twitter.com/UxNnEXJFHG

How bad was this kid this year that Santa skipped coal and gave him dog crap? Here was the kid’s reaction to getting a yule log for Xmas.

for everyone asking, this was his reaction to it LMAO pic.twitter.com/sEzpp2Rf4k

Not all of the viral Christmas videos are sh*t. This heartwarming video of pitcher Brady Singer paying off his parents’ debt as a thank you for all of the times they sacrificed so he could play baseball is all of the feels. You can read more about the story HERE.

Today is very special to my heart. To give back to the two people who have given up everything to support my brother and I. I can’t thank them enough. Love you Mom and Dad pic.twitter.com/AFHi2Xma0c

A teenager named Alex posted this unforgettable video of him giving his stepdad the best Christmas gift ever. On Twitter, Alec posted a video of his stepdad opening the gift and wrote: “my stepfather has raised me as his own since I was 3, this Christmas I surprised my family and asked him to adopt me. Merry Christmas.”

my step father has raised me as his own since i was 3, this christmas i surprised my family and asked him to adopt me. 🎄🎄 merry christmas. pic.twitter.com/NdkIuPMlDd

Another incredible Christmas adoption happened when a family adopted a boy who never truly experienced Christmas. Here comes the waterworks.

Today we gave the best Christmas Present to our cousin who has never experienced a actual Christmas… worth a watch pic.twitter.com/F0WfkiLzBn

After his dog and wife within months of each other, this family did what they could to try to cheer up their grandpa — they bought him a beautiful puppy. They surprised granddad on Christmas with a brand new bundle of fur and grandpa was instantly in love.

Grandas dog died a few months back and he asked nanny to let him get another one. Nanny passed away a month ago and he has been so lost since, we surprised him with a pup for Christmas today and he is so in love already. He is so precious and deserves the world💙💙 pic.twitter.com/x9RSzxTupN

This family celebrated Christmas with a white elephant gift exchange where everyone had to challenge each other to a mini-game to steal their gift. Maybe an idea for Christmas 2019?

So my family plays White Elephant with a twist: you have to challenge someone to a mini game if you want to steal their gift… With a huge family it gets out of hand pretty quick.
A thread of our games: pic.twitter.com/JEVFQiyThg

A sister gives the gift of a new car to her sibling who had a rundown jalopy that was breaking down on the roads.

lol I saw my sister was having car problems… so I did this! Merry Christmas… cashed out.. something lite 🎄🎁 pic.twitter.com/kRm5YVsPro

Kids surprise stepfather with Kiss tickets and an original tour T-shirt from his very first concert when he was younger.

“Fifteen years ago, my mom lost the diamond to her wedding ring. For most of her marriage, she didn’t wear a ring. Today my dad surprised her,” the post on Reddit says.

Fifteen years ago, my mom lost the diamond to her wedding ring. For most of her marriage, she didn’t wear a ring. Today my dad surprised her. from MadeMeSmile

A Christmas card has the voicemail from four years ago of their mother and they are blown away.

A woman receives a bear dressed as a police officer and it has the voice of her son, who was a cop when he died, and she understandably gets very emotional.

Mother receives bear with her late son’s voice built in who was a cop. from MadeMeSmile

A grandson pays back his grandpa for stepping up and becoming his father figure when his dad passed away.

Without your support, I couldn't of done this

This is what Christmas is all about pic.twitter.com/iHT34zoth3

“So my cousin recently lost her dog, Kobe, of 11 years… so my cousin’s boyfriend decided to surprise her with a new puppy for Christmas, pls watch, this video will definitely warm your heart up,” the caption on the tremendous viral video.

So my cousin recently lost her dog, Kobe, of 11 years… so my cousin’s boyfriend decided to surprise her with a new puppy for Christmas, pls watch, this video will definitely warm your heart up ❤️🤧 pic.twitter.com/RpNLBodDsW

I’m not crying, it’s all of the coquitos talking right now.