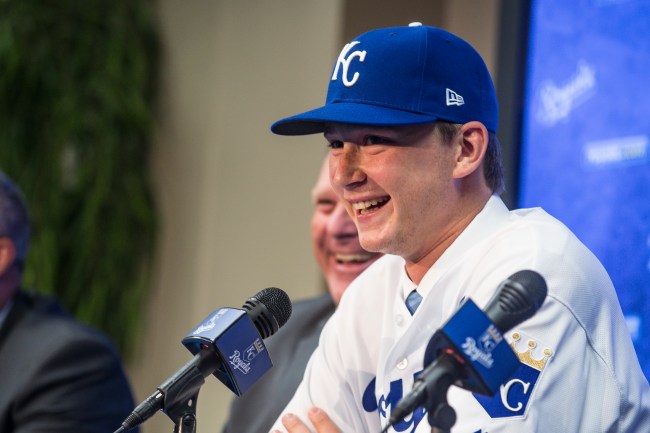 The Kansas City Royals handed pitcher Brady Singer a $4.25 MILLION signing bonus when they drafted him 18th overall in the 2018 MLB Draft. He’s a rich man now and he used some of that money to give his parents the most special Christmas present they’ve ever received.

The 22-year-old from Leesburg, Florida was drafted out of High School by the Toronto Blue Jays but instead opted to go play college ball for the Florida Gators where he finished his Junior season with an SEC-leading 10 wins and 2.25 ERA while being named the SEC Pitcher of the Year. He also won the coveted Dick Howser trophy.

Brady Singer was drafted by the Royals after his Junior season and he signed with them in July, receiving that multi-million-dollar bonus check that he used to surprise his parents with a Christmas present they’ll never forget. He filmed his parent’s reaction to the incredible gift and shared it in a tweet that immediately went viral.

Today is very special to my heart. To give back to the two people who have given up everything to support my brother and I. I can’t thank them enough. Love you Mom and Dad pic.twitter.com/AFHi2Xma0c

He handed his parents a letter explaining that he was paying off all of their debt from a loan they’d taken out at the bank. The letter reads:

“Dear Mom and Dad, I just want to say ‘Thank you’ for everything you’ve done to help me reach my dreams,
There’s absolutely no way I could have done all this by myself. Both of you constantly took off of work and spent every dime you made just to put a smile on my face.
My smile and appreciation for both of you has never stopped and it never will. The money you both spent on traveling, gear, hotel, food and all those Gatorades I drank is much more than I could ever give you, but there’s something I want to give to you.
I am paying off the loan from the bank. Also, I paid off all of your debt as well. Now, instead of trying to save money every weekend to replace the savings account you drained on traveling to see me play baseball, you can spend it on yourselves because you deserve the very best.” (via)

And here I thought I won Christmas by giving my parents a grill for Christmas. They really loved that gift. I actually had no idea how much they needed a new travel grill, I just thought it’d be a nice gift. It turns out, they really really loved it. That still pales in comparison to the reaction that Brady Singer got for paying off his parent’s debt.

For more on this story you can visit Fox News‘ article.