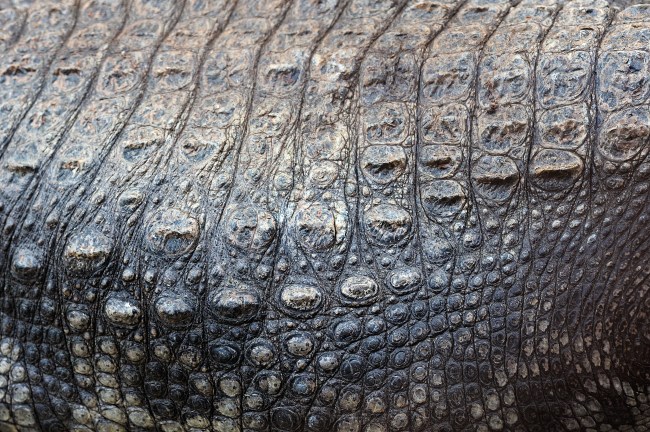 It’s not really alligator season down here in Florida because it’s ALWAYS ‘gator season. We’ve got these prehistoric reptiles crawling around our lakes, rivers, beaches, ponds, and swamps 24/7/365 and it’s easy to forget about them because they’re generally not the size of a Volkswagen Bus.

I sh*t you not, I once found an alligator in the bathroom of my high school years and years ago. The door was somehow left open and it was an outdoor campus without any enclosed hallways between buildings. The gator somehow found its way in that bathroom and I was the one who discovered it.

It wasn’t big at all, just a few feet long, and I hauled ass out of there as quickly as possible. Still, my frightened reaction wasn’t too far off from how these startled golfers reacted upon seeing ‘Chubbs’ the now-famous 15-foot alligator in Palmetto, Florida who roams a golf course.

FAMOUS GIANT GATOR RETURNS TO FLORIDA GOLF COURSE … 'HEY, CHUBBS!' Yeah, that massive 15-foot alligator sauntering through a Florida golf course has a name — because he's become a "regular" … and miraculously, no one's been eaten yet! Chubbs was first spotted at the Buffalo Creek Golf Course in Palmetto, FL back in 2016 — and has become a social media sensation ever since … mostly because he's a giant, green monster. But, the gator returned on Saturday — with stunned golfers crapping their pants as the carnivore strolled through his home course. Course officials have said Chubbs is almost like a pet — he does his own thing and doesn't bother anyone. Just as long as you keep your distance. As for his name, guessing it's inspired by "Happy Gilmore" — you remember the guy who lost his hand to a DAMN ALLIGATOR!!! #miamigolfsuperstore #Chubbs #alligator #Florida

A post shared by MiamiGolfSuperstore (@miamigolfsuperstore) on Oct 16, 2018 at 1:11pm PDT

Sage Stryczny captured video of the massive reptile over the weekend while golfing with his father at the Buffalo Creek Golf Course. Stryczny was clearly astonished at the size of it, and is heard saying a pretty colorful word as he watched Chubbs slowly stroll along the golf course.

The general manager of Buffalo Creek Golf Course has told FOX 13 in the past that Chubbs has been living at the golf course for a long time, and is not a nuisance.

He first made headlines a few years ago and now footage of him seems to pop up every 12 months when he shows back up at the course.

Actually, I’m not sure if he ever leaves the course or stays there. Or if it’s the ‘snow birds’ coming down to Florida from the north to escape Winter who forget he exists that take videos and cause him to go viral again. Whatever the case is, Chubbs is back and he’s looking like an absolute unit.

He’s just so damn big. I’m a born and raised Floridian who’s pretty desensitized to the sight of alligators and I’m still blown away by this absolute unit.

Chubbs has to be one of the largest alligators in America. And it’s noteworthy that the Buffalo Creek Golf Course general manager says he’s not a nuisance. I wonder if he’s doing that because Chubbs has become an attraction that actually brings golfers to the course.

To say he’s not a nuisance could be factually accurate. He might not bother the golf course or golfers. But an alligator that size has to eat A LOT OF FOOD in order to stay that big so Chubbs is certainly getting his meals in nearby.

For more on this you can click here to visit FOX13.