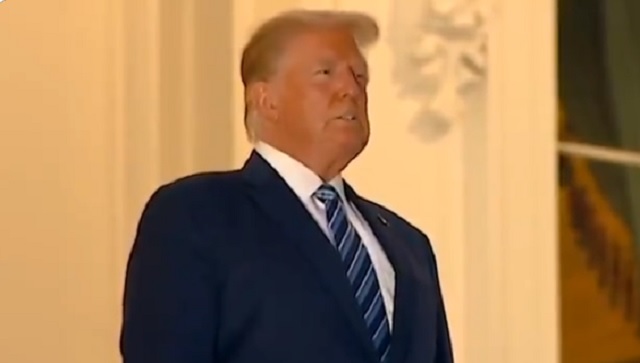 President Trump is back at the White House after a brief stint at Walter Reed Hospital following his Coronavirus diagnosis and the daughter of his close adviser Kellyanne Conway claims she has some inside information on his true condition.

After it was announced that Trump would be discharged from Walter Reed, Claudia Conway, who previously leaked information on her own mother’s bout with Coronavirus last week, claims Trump is not “doing better” as previously reported by the President’s doctor but is actually doing “badly” and not stable.

Kellyanne Conway is in constant contact with Trump–she remains one of his most trusted advisors. Her daughter, Claudia Conway, said on Tik Tok that her mother said Trump is doing very badly and they were trying to stabilize him to send him home. Lord.

Claudia Conway daughter of Trump advisor Kellyanne Conway, reports Trump is not doing "better" with #COVID19 despite recent Trump photo-ops and return to the White House.

Adding reports that she is #COVID19 positive thanks to her mom exposing her to it and lying about it. pic.twitter.com/Q1ExoT3hMO 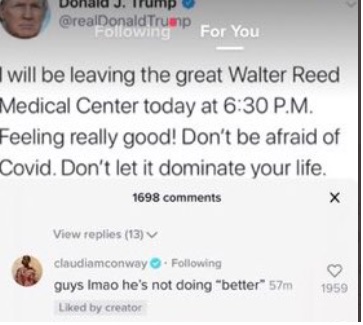 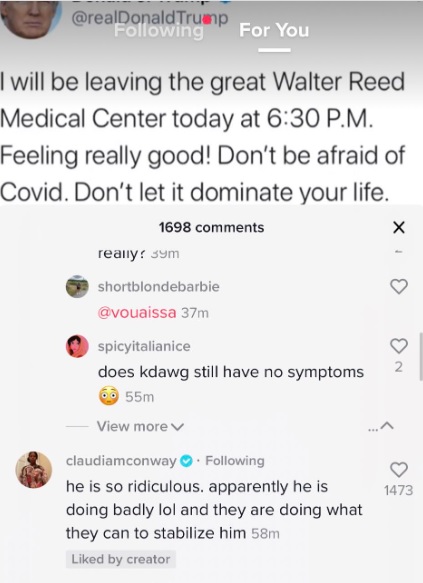 Conway’s claims come after a worrying video of Trump gasping for air during his return to the White House began circulating on Twitter.

Trump looks like he is gasping for air pic.twitter.com/4k2v4Jxlir

In med school, one of the signs you’re taught to look for in a patient with respiratory distress is the recruitment of the “strap muscles,” those muscles that flex in your neck when you can’t breathe.

This is not how a healthy man breathes. https://t.co/aXoXFRuQ9W

For medical trainees:
this is a great demonstration of “accessory muscle use” (look at the neck and the chest wall) that usually can outwardly indicate internal respiratory pathology https://t.co/psy3V1aYUG

“Over the past 24 hours the president has continued to improve.”

Donald Trump’s physician, Dr Sean Conley says the president is "not entirely out of the woods yet" but he is able to return home.