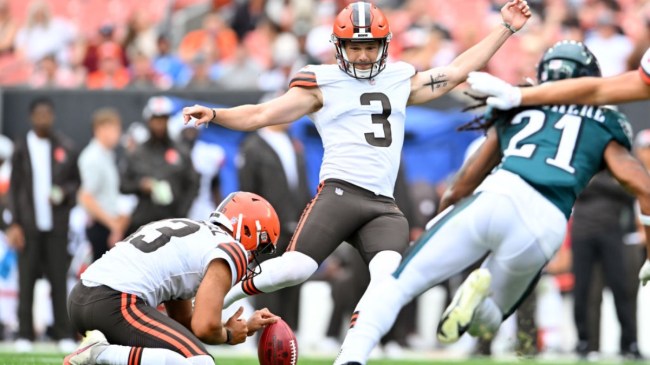 The Cleveland Browns had many issues that held them back during the 2021 season. Most of the blame for the team’s scoring problems was focused on Baker Mayfield. However, there was another issue that left some points on the field for the Browns.

The Browns did not kick the ball particularly well last season. Starting kicker Chase McLaughin made just 15 of the 21 field goals he attempted. That 71.4% conversion rate was among the worst in the league. All 6 of his misses came from between 40 and 49 yards.

The Browns made sure to address their kicking issues this offseason. The Browns made Cade York the first special teams player selected in the 2022 NFL Draft when they took him in the 4th round.

It seems York is already doing his best to prove they made a good decision.

A video emerged today of York making a 70-yard field goal before the Browns’ preseason game against the Chicago Bears.

Just to prove that his leg strength was no fluke on the first kick, York then reportedly turned around and made another field goal from 60 yards out.

#Browns Cade York made this 70 yarder in pre-game warmups and then turned around and made a 60 the other way https://t.co/dO0UZVvQTP

The current NFL record for longest field goal is held by Justin Tucker. He had just enough leg to get a 66-yard field goal over the crossbar for the Ravens as time expired in a game against the Detroit Lions last season.

If the Cleveland Browns are feeling bold during a game this year, maybe fans could get a chance to see York try and break that record now that he’s shown he has the leg to hit from 70.