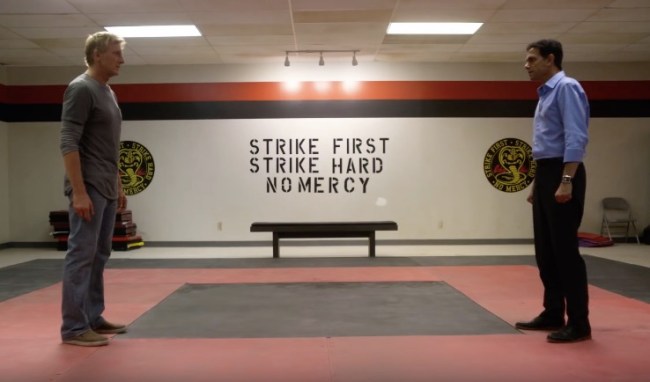 The last time we saw actor William Zabka was in How I Met Your Mother where it was pretty much proven that Daniel Larusso was actually the bully in The Karate Kid. Well, Johnny, Daniel, and the Cobra Kai Dojo are BACK thanks to YouTube Red and they’ve released this glorious clip that’ll have you feeling all sorts of 80s nostalgia.

‘Strike hard, Strike Fast, No Mercy’…Seriously, this 48-second clip might be the best part of your week:

The video below was just uploaded to YouTube and here’s what we know from the ‘about’ section in the channel’s description:

Thirty years after the events of the 1984 All Valley Karate Tournament, a down-and-out Johnny Lawrence (William Zabka) seeks redemption by reopening the infamous Cobra Kai karate dojo, reigniting his rivalry with a now successful Daniel LaRusso (Ralph Macchio), who has been struggling to maintain balance in his life without the guidance of his mentor, Mr. Miyagi.

Up until now, I’ve had approximately 0% interest in watching anything on YouTube Red. There’s not an episodic show on YouTube that can capture my attention. Until now. This is brilliant. The Karate Kid saga continues 30 years in the future with the re-launch of the Cobra Kai Dojo? Hell yes. Everything about this is a win.