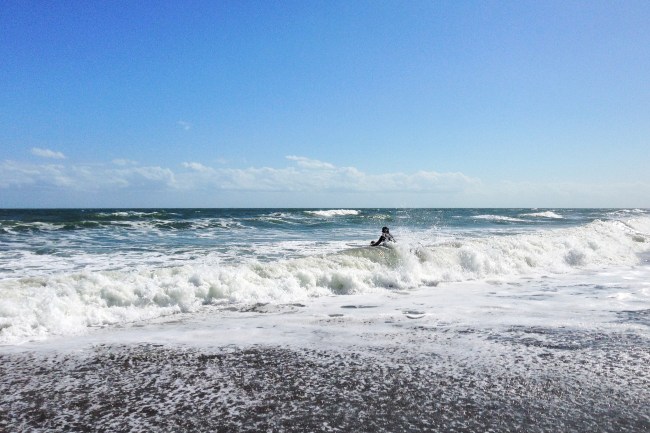 An extremely tense moment was caught on camera in Cocoa Beach and I’m a little curious why someone was filming with a potato instead of trying to help but we’ll get to that later. It is comforting that we don’t have to know what would’ve happened if off-duty Cocoa Beach Police Officer Adrian Kosicki wasn’t there because the officer swooped into the water and scooped out the kid as the shark came within a few feet (shorter than a body length).

In the footage, we can see the shark slowly tracking through the water as it approaches the child on a boogie board, getting closer and closer until the off-duty officer pulls him away at the last moment. It’s unclear why someone was just standing there filming with a cellphone camera from 1998 instead of telling that kid to get out of the dang water but all’s well that ends well, right?

You hear a bystander yelling ‘Hey buddy, there’s a shark right there! There he is!’ and it’s unclear if the person talking about the shark is also the person filming but what we can see is the only person who took action was off-duty Cocoa Beach Police Officer Adrian Kosicki.

We can’t say for certain what the curious shark’s intentions were but it’s obvious he was coming in to take a closer look and if the shark was suddenly startled by the kid on the bodyboard it could’ve ended in a serious disaster. Check it out:

CLOSE CALL: Take a look at the moment an off-duty officer in Cocoa Beach, Florida pulled a boy away from a shark. The police said Officer Adrian Kosicki went into the water when he saw the shark “get dangerously close, within only a couple of feet” of the boy on July 16. pic.twitter.com/oNE6HXN6EI

The shark wasn’t enormous and the water appeared to be quite shallow. I’d suspect the shark was somewhere in the 4-foot range but the kid was certainly smaller than the shark, as was the bodyboard he was on.

The police department shared praise for the rescuing officer on Facebook:

“We’re certainly not marine biologists, educated and trained to differentiate between the various species of sharks, their respective feeding habits, and aggressiveness near swimmers. We just do what we do best — protect the public from harm,” police officials wrote. “Thanks to Adrian, we’ll never know what that shark’s intentions were, and that little boy will forever have a pretty cool story to tell. Great job!”

This footage is so grainy it’s virtually impossible to tell what species of shark that was but this is peak shark encounter season in Florida as this time of year coincides with Summer break and packed beaches.