Colombian Drug Cartel Puts Out A $70,000 Hit On Drug-Sniffing Dog 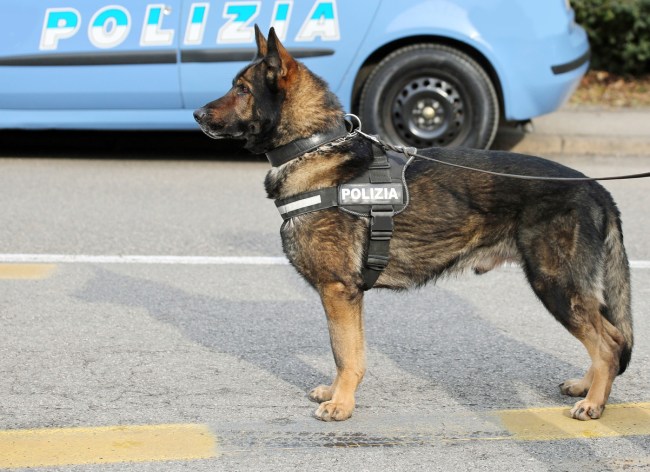 In every circle from the average pot smoker to the large-level drug trafficking operations responsible for distributing billions of dollars worth of feel good substances into various parts of the world, dope-sniffing hounds are the single most feared tool in law enforcement.

Not only do these four-legged narcs have the snout power to detect the slightest hint of drugs, no matter how well they are hidden, their olfactory sense is so vastly superior that they can actually smell in division. So while a human might walk into the kitchen and smell vegetable soup cooking on the stove, a dog is catching a whiff of peas, carrots, potatoes and every other ingredient. This makes it virtually impossible to throw off the scent of one of these suckers once it is given the mission to find illegal contraband.

But, as with anything that requires skill and talent, some drug dogs are better than others. In Colombia, a German shepherd named Sombra is recognized as a national hero for her role in tracking down tons of cocaine and putting hundreds of people behind bars. In fact, this narco-pup is so good at the job that the country’s most violent and powerful drug cartel wants her dead.

A recent report from BBC News indicates that Colombia’s dreaded Urabeños gang has put a $70,000 contract hit out on the dog. The threat is apparently so real that National Police have since relocated Sombra in order to give her a fighting chance at staying alive. The dog, along with her handler and an extra security detail, is now working the El Dorado International Airport in the capital of Bogotá rather than doing her usual coastal patrols.

“The fact they want to hurt Sombra and offer such a high reward for her capture or death shows the impact she’s had on their profits,” a police spokesperson told The Telegraph.

This drug dog has definitely done some damage to the cartel’s bottom line. Sombra is credited for sniffing out record amounts of drugs during her time on the counter-narcotics police squad. Earlier this year, she discovered 10 tons of cocaine during two separate busts – a haul worth several hundred million dollars on the black market. It doesn’t seem to matter where the cartel stashes their powered shipments — vehicles, banana crates, machinery — this drug dog has such an rock star snout that nothing gets by her.

So it makes sense why cartel boss Dairo Antonio Úsuga, one of the most wanted men in Colombia, wants the dog taken out. The hefty bounty is a testament to that. Several years ago, Urabeños, also known as Clan Usuga, offered a $500 reward for every police officer murdered. The kill fee went up if the cop was connected to counter-narcotics. Still, dead drug dogs are worth more in Colombia – at least the one they call Sombra. A report from El Tiempo indicates that freelance dog killers have some time to collect on the contract. Sombra is not scheduled to retire for another two years.

But this is an all or nothing deal. The Urabeños gang isn’t prepared to offer a reduced rate for simply ruffing her up.