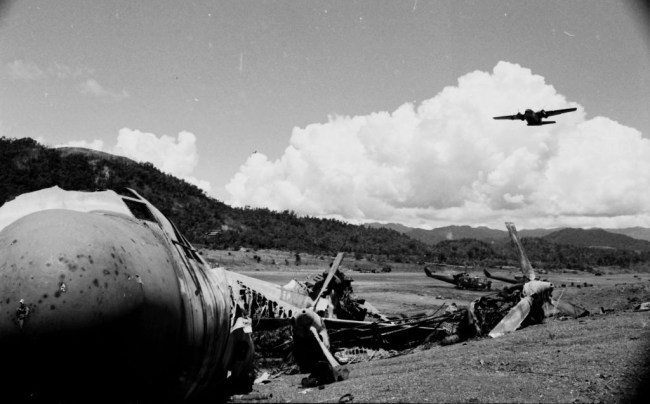 A U.S. Air Force pilot died 52 years ago during the Vietnam War and he is finally coming home. The remains of Maj. Roy Knight Jr. was flown home this week by none other than the fallen U.S. military member’s son.

Maj. Roy Knight Jr. was serving his country when he was deployed to the Vietnam War. When he was 36-years-old, the USAF pilot was leading a flight of two A-1E Skyraider aircraft on a strike mission over northern Laos. Knight’s aircraft was shot down by anti-aircraft fire on May 19, 1967.

The aircraft crashed and burst into flames. “Additionally, no beeper signals were heard,” the Defense POW/MIA website states. “While search and rescue efforts were initiated, an organized search could not be conducted due to the intensity of hostile ground fire in the area.”

Maj. Roy Knight Jr.was declared deceased and classified as “Killed In Action” by the United States Air Force in September of 1974 and promoted to colonel at the time.

There have been extensive searches for Knight’s remains since 1991 and in 1994 they discovered the pilot’s life support items. Finally in February of 2019, the Defense POW/MIA Accounting Agency identified Knight’s remains from the crash site by using dental records.

“To be able to do this, to bring my father home, I’m very honored and lucky,” Bryan said. “How many people have an opportunity to do this?”

Knight’s Southwest plane arrived at Love Field in Dallas and welcomed by military personnel and family. The airport fired an arc of water over the airplane as it taxied to the terminal, a symbol that is traditionally done when an aircraft is retired from the fleet.

Photos show the airport’s ground crew standing at attention as Roy’s casket draped in an American flag was unloaded from the plane.

As we wait at the gate, we’re told that Captain Knight is coming home to Dallas. When he left from this very airport to fight in Vietnam his 5 year old son came to the airfield and waved goodbye. It was the last time he would see his father alive.

The entire terminal has come to watch this arrival. pic.twitter.com/HW3yAHEXBf

“Our Southwest Airlines family is honored to support his long-hoped homecoming and join in tribute to Col. Knight as well as every other military hero who has paid the ultimate sacrifice while serving in the armed forces,” Southwest Airlines said.

Knight will be buried with full military honors on Saturday.