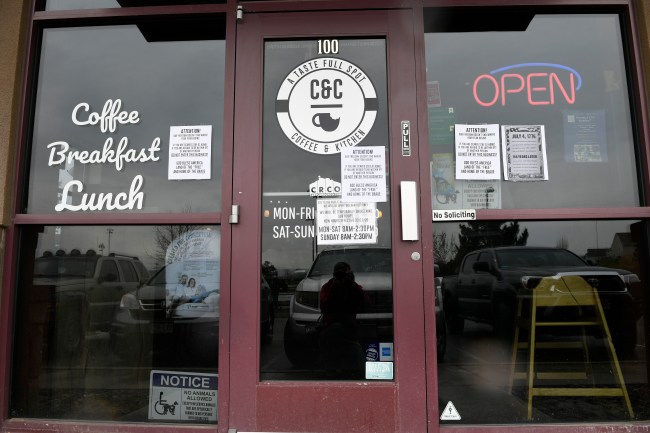 On Sunday, Castle Rock’s C&C Coffee and Kitchen in Colorado defied statewide order that limits restaurants to takeout and delivery service and opened to packed crowds for Mother’s Day.

Happy Mother’s Day from C& C in Castle Rock, where the owner said this is almost double a normal Mother’s Day. pic.twitter.com/cPSzjmAfAg

A Castle Rock restaurant saw big crowds Sunday when it fully reopened for Mother’s Day in open defiance of the statewide public health order that limits restaurants to takeout and delivery services.

Customers packed C&C Coffee and Kitchen on Trail Boss Drive on Sunday, filling the restaurant’s tables, its patio and forming a line out the door for dine-in service.

Whitehill said he was surprised to see the large crowd when he arrived. Wearing a mask, he went inside to try to pick up his order, which he’d already paid for, but left right away, without his food, after realizing that none of the staff were wearing masks and no one inside was practicing social distancing, he said.
“It was unbelievable to me,” said Nick Whitehill, who’d ordered food for what he thought would be curbside pickup Sunday.

On Monday, Colorado Governor Jared Polis suspended the restaurant’s license for at least 30 day and ordered them to shut down immediately.

C&C Coffee and Kitchen presents an “immediate health hazard,” Gov. Jared Polis said at a news conference, and its business license will be suspended until it no longer creates a threat to public health — likely for at least 30 days.

. The restaurant reopened to in-person dining on Mother’s Day in defiance of the statewide COVID-19 public health order that limits bars and restaurants to only serving customers via takeout and delivery service.

“I hope, I pray that nobody falls sick from businesses that chose to violate the law,” Polis said when announcing the suspension. “But if the state didn’t act and more businesses followed suit, it’s a near guarantee that people would lose their lives and it would further delay the opening of legitimate businesses.”

The restaurant owner told the Denver Post that he wasn’t sure what he was going to do next and felt the financial pressure to remain open.

He said he is not yet sure what the restaurant will do next. Those who violate the statewide public health order commit a misdemeanor criminal offense punishable by a fine of up to $1,000 and up to a year in jail.

“If we mishandled food or whatever, they can intervene and they do,” he said about the Tri-County Health Department. “I understand they have the power, I’m just saying I disagree with the power because they’re not elected.”

“Everyone is tired of this and they’re ready to live life,” he said. “What kind of life are we going to have if we’re all scared to live and we’re always in a bubble? No one wants to live like that. There are risks all over the place, every day. There are animals who can hurt you in the mountains, but you don’t stop going there. You can drown in the ocean surfing, but people still go.”