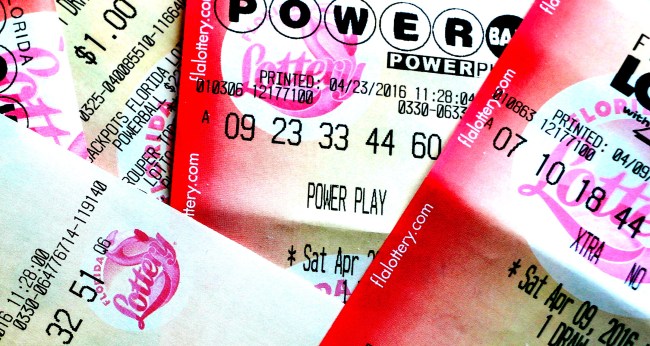 Okay, this person might not be a jerk at all. I don’t know them or anything about them. But I know there is a very small amount of good luck floating around the planet right now and this person managed to siphon up an extremely disproportionate amount of that luck when they hit a $1 million Powerball jackpot not once TWICE in a single day.

The man, known as Joe B., has been playing the same lottery numbers for 30 years according to reports of his jackpot winnings and until now he hasn’t won diddly squat, at least nothing that would make national news. But on March 25th he bought two tickets with the same numbers (why???!!?!) and managed to hit all five numbers for a cool $1 million per ticket.

Despite the fact that Joe B. did manage to cash both tickets for a million dollars I simply cannot fathom what would ever compel a person to buy two lottery tickets with the exact same numbers on them. 9News.com reports:

PUEBLO, Colo. — They say persistence is key, and after 30 years of playing the same numbers in the Colorado Lottery, a man in Pueblo found that to be true and finally got his big reward.

Two big rewards, that is.

The winner, identified as “Joe B.,” won two Powerball jackpots on Wednesday, March 25 — worth $1 million each. “Joe B.” claimed the winnings Friday.

The winning tickets were both sold to “Joe B.” on Lake Avenue in Pueblo: one at a 7-Eleven (926 Lake Ave.), the other at a Loaf and Jug (2050 Lake Ave.). According to Colorado Lottery’s Communications Director Meghan Dougherty, “Joe B.” bought one ticket in the morning, the other in the evening. (via)

Maybe I’m not fully understanding the rules of this specific lottery game but the way I see it is if he managed to hit all of his numbers, and someone else did as well while playing the same numbers, he’s still splitting it multiple ways. Does playing two tickets with the same numbers just ensure he’d get two stakes of a potential mega jackpot? Because I see it as throwing away an extra two dollars every time.

Of course, when you hit and win a million dollars it’s not throwing money away at all and he just made up for the probably asinine amount of money he’s spent on the lottery over the past 30 years of playing the same numbers every single week, probably multiple times a week in many cases.

For more on this story, you can click here to visit 9news.com.