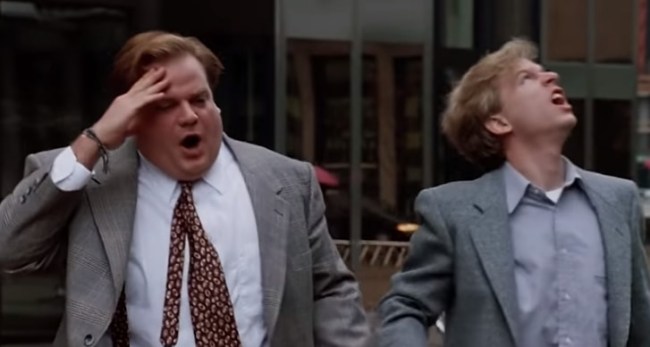 You’ve heard the phrase “That’s gonna leave a mark” in plenty of movies before. But maybe you just thought you only remember it when Chris Farley perfectly delivered that line when hitting his head in Tommy Boy. Turns out that the catchphrase joke is used a lot in movies and TV shows and way, way more than you think. It is used so much in entertainment that there is now a 15-minute compilation of all of the times “That’s gonna leave a mark” was used in movies and TV.

This exhaustively researched compilation comes to us via editing guru Shawn Kohne AKA The UniBaller, who you may remember from the tremendous Game of Thrones/Princess Bride mashup, “Jim Carrey Falling,” “The Sandlerverse” which shows how all of the Adam Sandler movies are eerily connected, and other entertaining and quirky vids. He spent the last seven months finding every “That’s gonna leave a mark” and masterfully created this compilation. Maybe Shawn needs a hobby or a pet.

Shawn painstakingly searched every nook and cranny of movies, TV shows, and even video games to find every single utterance of the phrase, “That’s gonna leave a mark.” And we mean EVERY movie and TV show, not just blockbuster movies and hit shows. We’re talking about Dickie Roberts, the American Idol movie From Justin to Kelly, and One Tree Hill. Poor Shawn, why do you subject yourself to this torture? Even Top Chef, Nitro Circus, and BBC nature shows. EVERYTHING. There are 105 times that the expression “That’s gonna leave a mark” was used. Hey Hollywood, maybe get a new catchphrase for your slapstick comedy gags?