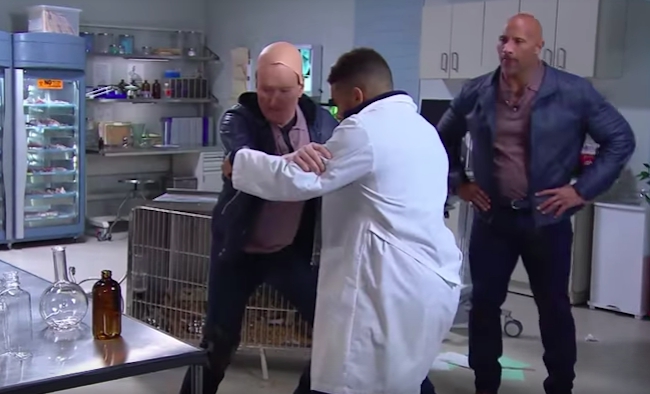 Brendan Frasier was still a marketable action star when the man most popularly referred to as “The Rock” at the time made his big screen debut in 2001 as the crime against cinema better known as the CGI version of the Scorpion King at the end of The Mummy Returns. The Hollywood landscape has changed ever so slightly since then, and Dwayne Johnson has become the go-to man when you need someone to defeat some larger-than-life adversary.

Next month, the world will get to experience the latest entry in Johnson’s consistently similar oeuvre in the form of Rampage, a movie where he teams up with a giant gorilla named George and fights a giant lizard because why the fuck not? He met up with human matchstick Conan O’Brien as part of his promotional junket, and the talk show host got a chance to see what it’s like to be the actor’s stunt double— a gig he probably won’t be landing anytime soon.

Conan kicked off the segment by showing Johnson some movie ideas he had for the two of them, including a Simon and Garfunkel biopic I never knew I needed in my life until now. He proceeded to don a bald cap and get repeatedly thrown across a laboratory table before bringing out his own version of George that best resembles the creature from the Persian Cat Guardian meme.

Unfortunately, Conan didn’t get a chance to try to make an impossible jump between two skyscrapers, but I assume it would have ended as well for him as it did for Johnson when he aimed for the bushes in The Other Guys.