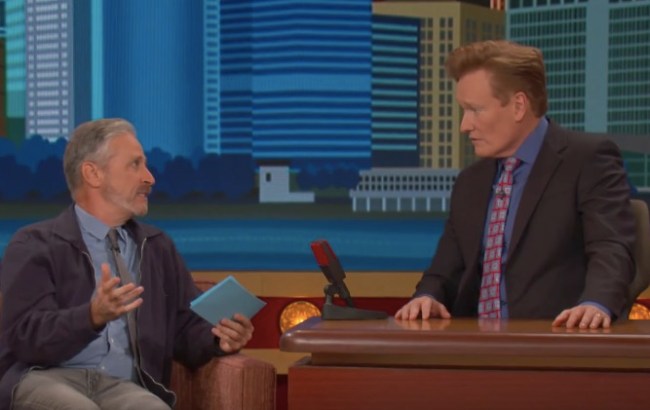 Conan O’Brien’s filming his show in NYC this week. Conan famously brought his show to the West Coast when he was ousted by Jay Leno after briefly taking over the The Tonight Show in 2010 before Leno decided he didn’t actually want to retire. Conan spent a few months getting paid not to work due to contractual issues, but ultimately he brought his show to TBS and started filming in Hollywood, opting to leave NYC for a fresh start out West.

Conan had spent his entire professional life in NYC. Conan was born in Massachusetts, went to Harvard, and then took his first job writing for Saturday Night Live and then The Simposons. Conan O’Brien was a New Yorker from 1987 to 2010, but is he still a New Yorker now that he’s living on the West Coast?

Jon Stewart popped up as a surprise guest on Conan last night where he grilled Conan with a series of difficult questions about the city. It was part of Conan’s ‘NYC Citizenship Test’. Sure, Conan dropped jokes for a lot of his answers but it was also pretty obvious that wrote out these questions himself to ingratiate himself with New Yorkers once again. Regardless of the seriousness of the quiz, this was great stuff.

I have to admit, I love Jon Stewart’s “you will always be a New Yorker, (but) that being said, you don’t know shit about this place” quote. That pretty much sums up everyone New Yorker I’ve ever met. The city is always changing. You could spend your entire life as an NYC historian and only scratch the surface. It’s fair to say that nobody knows shit about New York because the breadth of information is simply too vast for any one individual. But, Conan passed the test and I’m impressed.