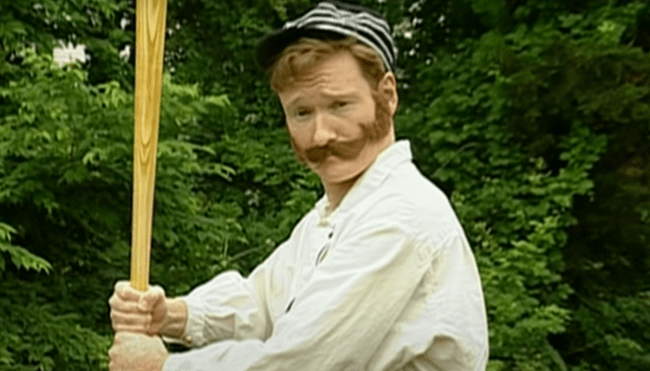 Last month, we learned Conan O’Brien had decided to bring his illustrious late night career to an end after almost three decades when the legendary host announced his time on TBS was coming to a close.

It’s hard to truly label this “the end of an era” when you consider O’Brien is planning to take his talents to HBO Max for a new weekly venture. Based on how he’s fared over the course of his previous transitions, there’s no reason to doubt he’ll expertly pick up where he left off, but it’s hard not to view his jump to a streaming platform as fairly bittersweet.

After cutting his teeth as the president of The Harvard Lampoon while attending college a few miles away from his native home of Brookline, O’Brien continued to hone his comedic skills in the writer’s room at Saturday Night Live before defecting to The Simpsons, where he was responsible for writing some of the show’s most hallowed episodes.

In 1993, he got the chance to jump in front of the camera as the host of Late Night with Conan O’Brien on NBC. When the show premiered, the gangly 6’4″ comedian was literally the red-headed stepchild of late night television, but in a way, he was also the youngest sibling in the family of talk show hosts when you consider he could get away with basically anything given his time slot.

Conan amped up David Letterman’s signature weirdness with his hilariously unique brand of unapologetic absurdity that most critics did not appreciate when he initially achieved a national platform. However, he would eventually carve out a niche in the late night space thanks to viewers who appreciated a brand of humor defined by unbridled silliness and self-deprecation.

O’Brien didn’t exactly reinvent the late night wheel, but there’s a reason he spent more than 25 years posted up behind a desk on a nightly basis—whether he was using it to spin his wedding ring to kill time during the writer’s strike or staring across it in disbelief whenever he had Norm Macdonald on to do his thing.

However, nothing sums up Conan’s impact on television better than what he did when he left the comfort of his desk for the outside world in the many remote segments he was at the center of over the years.

However, none of those remotes stick out quite like the day O’Brien took a trip to Old Bethpage Village Restoration to play old-time baseball with a bunch of 19th-century cosplayers, which I’d argue is (and will likely always remain) his magnum opus.

If you’ve seen this clip before, I don’t have to tell you what makes it as amazing as it is, and if you haven’t, I envy you for getting to experience it for the first time. In the first half of the segment, he is hilariously beaten at his own game by the wife of a Civil War soldier who honestly deserved an Emmy for her performance, but things get taken to another level when he joins the baseball game after donning a uniform and a handlebar mustache.

Conan harnessed his improv skills to dream up some incredible era-appropriate smack talk before squaring off with a headhunting pitcher while throwing up his dukes like the elongated leprechaun he resembles. However, nothing comes close to topping the reaction he has when a plane flies over the field, as crying out “What ho! What is that demonry?” is arguably the pinnacle of his late night career.

There’s a chance O’Brien manages to top himself when he enters the uncharted (and uncensored) waters of HBO Max, but even if only he manages to produce anything half as amusing as this remote, we’ll still be in for a real treat.