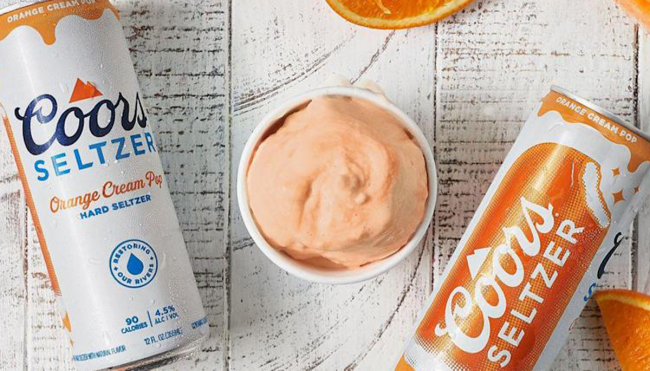 For the past couple of years, essentially every player in the alcohol industry has attempted to get their hands on a piece of the incredibly lucrative hard seltzer pie that shows no sign of getting stale at any point in the immediate future.

This mad scramble has required newcomers to figure out ways to stick out in an impossibly saturated market, which initially sparked an arms race that saw increasingly boozy offerings hit shelves before things mostly calmed down after Four Loko dropped a 12% ABV bomb that effectively ended it.

Since then, purveyors of hard seltzer have largely focused on dreaming up some particularly novel flavors in an attempt to drum up attention, which resulted in the creation of a spiked drink made with Warheads and the Pumpkin Spice monstrosity Bud Light will likely unleash on the world in the next few months.

Earlier this month, Coors released its contender for Drink of the Summer in the form of its new Orange Cream Pop variety, and now, it’s taking things to the next level with a new creation that sounds equally delicious and ridiculous: a hard seltzer ice cream.

The 5% ABV concoction was created with the help of the boozy ice cream masters at Tipsy Scoop, who will be serving it up at its stores in New York City until the supply runs out. However, you can also preorder it online and have a four-pack shipped straight to your door anywhere in the United States.

That’s exactly what I just did, and I eagerly await the chance to share my thoughts once it arrives next week.