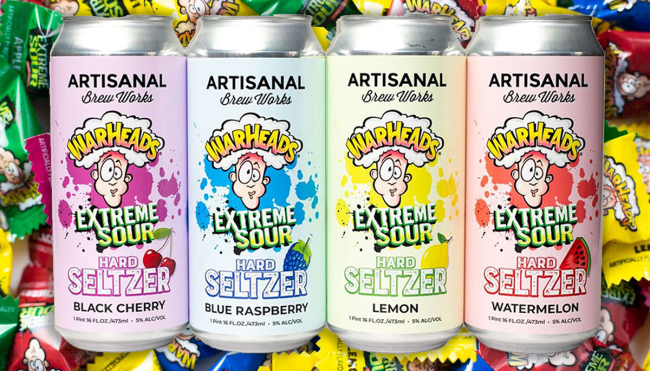 When I was younger, I was introduced to what I’d eventually realize was the concept of “masochism” courtesy of Warheads, the painfully sour hard candy that absolutely laid waste to your taste buds.

My mouth hurts just thinking about the many occasions where I’d pop five lemon Warheads at the same time during lunch in a retroactively hilarious attempt to show my classmates just how tough I was (although I’d be lying if I said I didn’t regularly wash off the pucker-inducing coating before eating them when in the confines of my home.)

I couldn’t tell you the last time I subjected myself to the Full Warheads Experience. With that said, I frequently consume the adult version in the form of the sour beers I’ve come to adore after acquiring a taste for them a few years ago—which is why I’m very, very intrigued by a new concoction a brewery in New York has created after teaming up with Warheads for a new line of hard seltzer.

Last week, Artisinal Brew Works revealed the incredibly intriguing collaboration with the company that produces Warheads, which dropped at its Saratoga Springs operation earlier this week. The “Extreme Sour” hard seltzer clocks in at 5% ABV and harnesses the signature flavors of the candy’s Watermelon, Blue Raspberry, Black Cherry, and Lemon offerings in the 16-ounce tallboys they’re sealed in.

The brewery addressed concerns the seltzers may be as cripplingly sour as the Warheads that inspired them in an Instagram post, saying:

“Drinkability, sourness, sweetness, and flavor all had to be balanced when creating these. Our goal thus became to make these Hard Seltzers taste like the candy flavoring with a balance of tartness and sweetness, so that they could be drinkable by the pint.”

Unfortunately, you currently have to make the trek to Artisinal Brew Works if you want to get your hands on the limited release. However, it teased it could boost production in the future if it seems like the demand is there.

I can only hope that’s the case, as I can’t think of a better way to pregame in the parking lot whenever shows at SPAC become a thing again.