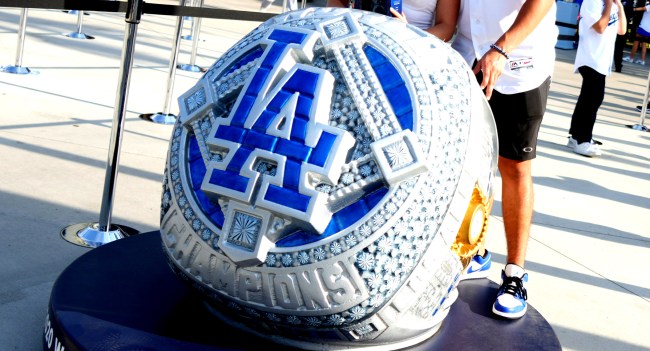 The fake championship rings were created to look like those given to the Pittsburgh Penguins of the NHL as well as the Los Angeles Dodgers and Washington Nationals of Major League Baseball.

The shipments were intercepted in Cincinnati, Ohio of all places and originated in Singapore, Saudi Arabia, and the United Arab Emirates.

The 94 fake championship rings that came from Singapore and United Arab Emirates would have been worth a total of $141,000 had they been genuine, reports the CBP.

The 200 counterfeit Los Angeles Dodgers championship rings which came from Saudi Arabia would have been worth $300,000 had they been able to have been sold.

The rings, destined for private residences in California, Pennsylvania, and Colorado, were determined to have been fake by the CBP’s Centers for Excellence and Expertise (CEEs).

The CBP called the rings “poor-quality”, but I don’t know… they look pretty dang legit to me.

2 shipments containing counterfeit championship rings of the last 2 World Series winners were seized by Cincinnati CBP. The rings were determined to be counterfeits due to their poor quality, however, consumers could be duped into purchasing these fakes. https://t.co/yFPzAdIbS7 pic.twitter.com/dNM5QYcuJL

On Tuesday, U.S. Customs and Border Patrol announced the Cincinnati CBP had also seized a shipment of assorted counterfeit Super Bowl rings that had arrived from China, including rings supposedly made for Hines Ward and … Tom Brady? I guess if you’re going to counterfeit a Super Bowl ring you might as well shoot for the stars, right?