Couple Buys House Only To Discover There Are 450,000 Bees Living In The Walls 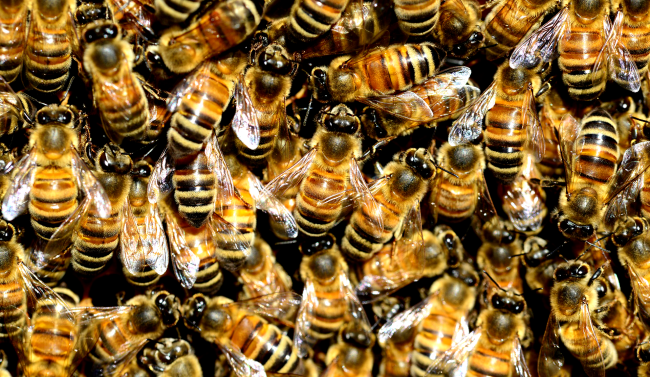 Welp, that’s it. The apocalypse is obviously just around the corner. We’ve gone from bees doing their best to save the planet to them living inside a person’s eye (yes, that actually happened) to 15,000 bees showing up in a guy’s car to this week’s report that a couple who recently bought a house saying they had to have 450,000 bees removed from the walls of their new home.

That’s not a typo. FOUR HUNDRED AND FIFTY THOUSAND bees had to be removed from the walls of their recently purchased house.

If ever there was an appropriate time for a “just burn it, burn it down” reaction, that was it. But they didn’t.

Sara Weaver and her husband say that after they purchased a farmhouse in Pennsylvania without conducting an inspection there wasn’t any indication that there would be a problem with bees.

That, however, was because they bought the home and took possession of it in the winter.

It wasn’t until the temperatures warmed up that they realized the house, built in 1872 in Skippack – about 30 miles northwest of Philadelphia, had a problem.

A family in Pennsylvania bought their dream farmhouse only to get a preexisting housewarming gift on one wanted… 450,000 bees! pic.twitter.com/LpxALuF1dH

Not that they weren’t warned.

“On the seller’s disclosure it said ‘bees in wall,’ and that was it and I think because one, we didn’t see them and two, we were just so floored that we actually found land in the [school] district that was within our price range that I didn’t really ask any questions about those bees,” Weaver told CNN.

“I didn’t think it would be that big of an issue. It didn’t even cross my mind but when spring arrived that’s when we started to see them.”

Oh… those bees living in her new home’s walls? Yeah, they’ve been there for almost 35 years.

“The seller’s husband passed away and I’m not sure what exactly happened but she wasn’t living there, the condition this house was in was horrendous,” added Weaver. “It was so dirty and now that I’m thinking about it, I originally thought it was dirt on the windows that I cleaned but it was probably honey because there were drip marks.”

Allan Lattanzi, a professional beekeeper, who the Weavers hired to get rid of the bees, said he had already been to the house about four years back, but the owner at that time said she she couldn’t afford to pay for the bees removal.

A Pennsylvania couple got a $12,000 bill after they had approx 450,000 bees removed from their house's walls. In December, the Weavers purchased a 150-year-old farmhouse near Philadelphia. Though they were aware the house held some bees, they didn't think it would be so severe. pic.twitter.com/DLYoX02k5J

Sara Weaver has set up a GoFundMe to try to help defray the cost of relocating the thousands of bees.