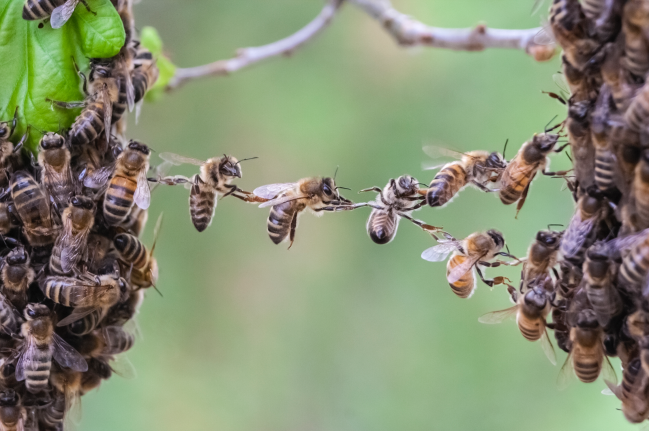 Imagine walking into a Wegmans to pick up some paper towels, a few popsicles, and some mac ‘n cheese from the hot food area. Quick stop. Don’t even need a list. You know where everything is. Just gonna be in and out so fast that you leave the windows down. What could go wrong?

He had just finished grocery shopping, but a New Mexico man got much more than he bargained for when he returned to his car in the store’s parking lot: A swarm of 15,000 honey bees had taken over the back seat.

The man, whose name was not released, had left a window down in a Buick while he made a 10-minute stop at an Albertsons supermarket on Sunday afternoon in Las Cruces, N.M., the authorities said.

It wasn’t until he had started to drive away that he noticed that something was amiss, according to the Las Cruces Fire Department.

“Then he turned back and looked and like was, ‘Holy Cow,’ ” Jesse Johnson, an off-duty firefighter and paramedic whose hobby is beekeeping, said of the man’s reaction in an interview on Wednesday. “He called 911 because he didn’t know what to do.”

Good thing the fire department just happened to have a blossoming apiarist on staff (you bet I had that word ready to go. Read a book one time.) Not exactly sure how you climb into your car, check your mirrors, fasten your seatbelt, and throw that puppy in drive without realizing that 15,000 bees are playing pattycake in the backseat. But good on this fella for not immediately flooring it through the canned goods aisle of the grocery store. If I see 15k bees in the backseat, I’m bailing from that car like John Wick. I’ll take skinned elbows and a some distressed kneecaps on my jeans over 10-5,000 bee stings any day. Goodbye, so long, heads up, there’s a bee missile heading towards you.

Beekeeping is one of those hobbies that seems missable to me. Meaning, you can live a pretty full life without ever having dabbled in beekeeping. Sure, a dollop of honey is great on some Fage greek yogurt, but I’ve never needed it so fresh that buying it in a plastic bear wasn’t good enough. Maybe it’s the science of bees that beekeepers enjoy so much? Don’t get me wrong, those up-close videos of bees killing hornets are charming:

But to keep hives in your backyard? Tempting fate for the day when your son/daughter brings a friend home from school who hasn’t yet been diagnosed with a severe bee allergy? Not worth it.

From the fireman who relocated the bees:

“One guy got stung on the lip, and we made fun of him the next morning,” Mr. Johnson said.

Roll up your windows when you go the grocery store. Unless you have a dog inside. In which case, crack the window.