Couple Finds $1.8 Million Lottery Ticket Only Days Before It Expired While Cleaning Up House For Thanksgiving 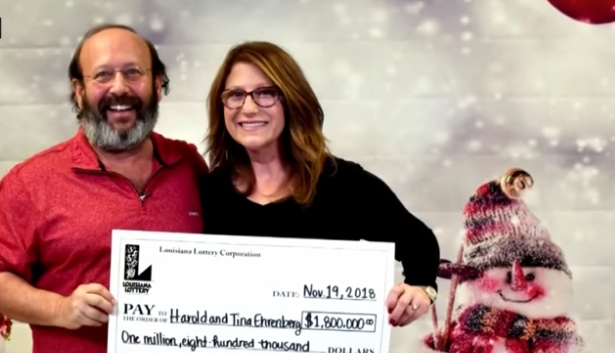 There’s gold in them thar hills of trash. One couple is thankful they weren’t slobs this week because their tidying up their house made them $1.8 million richer after they discovered a winning lottery ticket.

Harold and Tina Ehrenberg were cleaning up their home in Mandeville, Louisiana, in preparation of hosting guests for Thanksgiving. The lucky cleanup not only made their house presentable, but it also raked in a winning lottery ticket worth $1.8 million.

“We have family coming into town for Thanksgiving, so I was cleaning up the house and found a few lottery tickets on my nightstand that we hadn’t checked,” Tina said. They checked online and discovered that the old lottery tickets had won a big prize — $1.8 million.

The Ehrenberg’s purchased the ticket for the Louisiana Lottery Lotto drawing on June 6 and they found it just in the nick of time. Louisiana lottery tickets expire after 180 days, which means that the ticket would have been worthless after December 2, 2018.

“We don’t have any plans to buy anything crazy or go on any big trips,” Tina Ehrenberg said. The Ehrenberg’s said they plan to use the money for retirement. “The most fun is going to be depositing that check,” Harold Ehrenberg said.

After taxes, the $1.8 million lottery ticket pays the Ehrenberg’s $1,274,313. What are you waiting for? Get to cleaning your pigsty because maybe you have buried treasure underneath all of your filth.