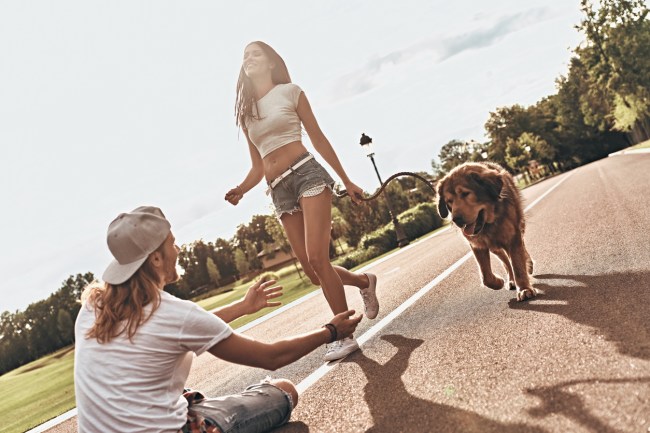 A wise man once profoundly pontificated, “Modern problems require modern solutions.” One Canadian couple attempted to skirt draconian COVID-19 lockdown laws by “walking their dog,” but they weren’t actually walking a dog, the wife was walking the husband on a leash. Kinky.

The province of Quebec has one of the strictest coronavirus lock(ups)downs in the world, and last week it got even more stringent. Quebec instituted a new curfew that prohibits people from going outside between 8 p.m. and 5 a.m. Those who defy the curfew “face fines of between $1,000 to $6,000.”

In the first weekend of the curfew, “police officers across Quebec handed out 750 tickets worth thousands of dollars in fines to people caught out after 8 p.m.” That’s quite the revenue-generator.

Walking your dog is one of the few exceptions that allow people to go outside during the dangerous curfew hours, but dog-walkers must be within a “kilometer of their homes.” A couple in Sherbrooke, a city in southern Quebec, thought they devised a way to get around the drastic curfew.

Sherbrooke Police spotted the couple around 9 p.m. on Saturday, and they were “breaking the curfew.” The couple broke the law by committing the crime of walking on the sidewalk.

However, the couple alleges that they were walking a dog.

“One of them had the other on a leash, and she said she was taking her dog, pointing to her partner, out on a walk, as allowed under the exceptions provided by Quebec’s premier under its curfew law,” said Sherbrooke Police spokesperson Isabelle Gendron.

The 24-year-old woman was walking her 40-year-old partner. Since the husband is a human and not a canine, police charged the couple for breaking curfew. The authorities also hit the couple with massive fines.

According to the police, the couple said it would be their “pleasure” to receive the fines. The couple allegedly added, “It would not stop them from breaking the rules in the future and they would see how many tickets they could get.”

“The couple were given fines of $1,546 each, and additional tickets of $100 and $50 for breaking municipal regulations,” The Edmonton Journal reported.

This is a huge blow to doms who expected to be walking their subs around Quebec.

To these freaks on a leash, we dedicate the soothing sounds from the nu-metal band Korn.