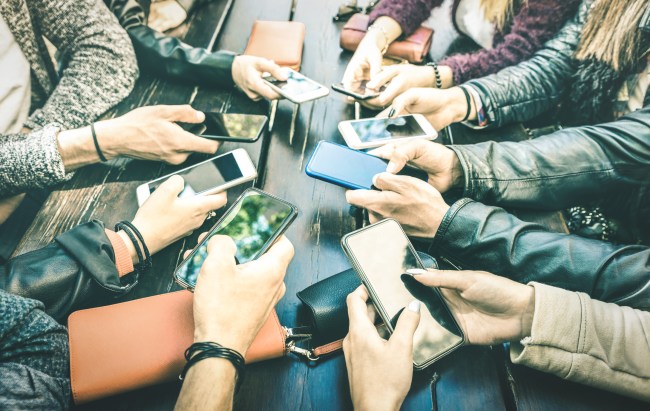 If you received a group text message this past weekend or today about a nationwide ‘Mandatory Quarantine’ as part of the Stafford Act, that message is fake, and it’s spreading dangerously fast. Full stop: that is not happening. It may happen in the near future just like every other possibility on the planet is on the table at this point but this viral text message that’s been spreading like wildfire is wrong and dangerous.

The 100% fake and misleading text that’s spreading around faster than COVID-19 reads something like this:

“In 48 to 72 hours the president will evoke what is called the Stafford act. Just got off the phone with some of my military friends in DC who just got out of a two hour briefing. The president will order a two week mandatory quarantine for the nation. Stock up on whatever you guys need to make sure you have a two week supply of everything. Please forward.” 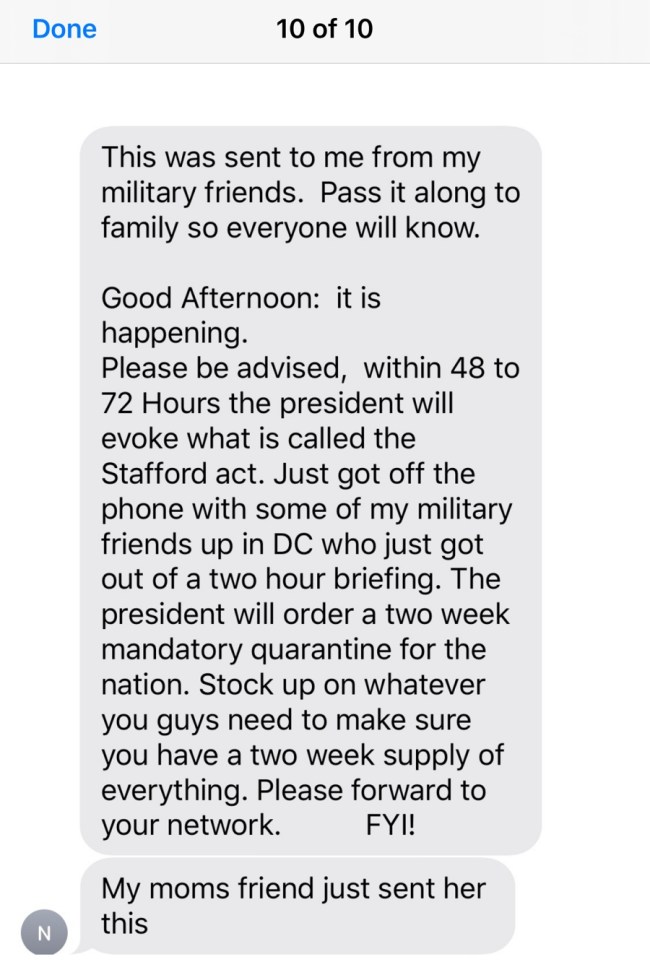 For starters, nobody knows where it came from and how it started. There are plenty of theories (Russia?!), but this fake message spread so far so fast the National Security Council (NSC) already issued an official statement on it:

Text message rumors of a national #quarantine are FAKE. There is no national lockdown. @CDCgov has and will continue to post the latest guidance on #COVID19. #coronavirus

That message reads: “Text message rumors of a national #quarantine are FAKE. There is no national lockdown. @CDCgov has and will continue to post the latest guidance on #COVID19. #coronavirus

Florida senator Marco Rubio has clearly been fielding a ton of questions about this:

We will continue to see closings & restrictions on hours of non-essential businesses in certain cities & states. But that is NOT marshall law.

I think one of the aspects of this text message that immediately lures people in is the assumption that this is coming from someone in the military with insider information. This is not true, it’s completely made up. I woke up to this text in the group chat this morning and one guy saw it yesterday, another claims to have seen it spreading around NYC text chains on Friday.

A national quarantine/lockdown is still a very real possibility in the future but this is just fake news that’s most likely designed to instill fear and unrest during a time of crisis. This guise of a ‘friend in the military’ is something that immediately makes this hoax believable because we want to believe that our government and military have a handle on everything. Spoiler alert: they don’t.

Thankfully, there are a lot of people out there who have figured out this is a hoax, 100% fake news, and are spreading the word:

If you get this text, it’s fake. Also, people who take advantage of situations like this SUCK.#StaffordAct #Quarantine pic.twitter.com/PN4vtiRuwV

Knew this was going to happen…

quarantine for the nation. Stock up on whatever you guys need to make sure you have a two week supply of everything. Please forward to your network. Y’all believe this text I just got or nah?

The CDC has recommended that gatherings of 50 or more people be postponed or canceled for the next eight weeks. That’s where we’re at as of the timing this is being published. Individual cities and states have made very different rules. NYC, Boston, and plenty of other cities have limit bars and restaurants. This will become more prevalent in the coming days and that’s a certainty. Just make sure you are getting your information from reputable sources, not ‘a friend in the military’ via Group Text.

If and when a national quarantine is announced it will be done so through the proper channels, not by a random text chain with the dudes you went to college with but haven’t seen in years.

The explosion of fake news and disinformation campaigns on places like Facebook and Twitter has made some people much more adept at rooting out fake news. But in times of crisis, for the vast majority of the population, we’ll see alarming messages and be inclined to believe them because news is filtering in faster than anyone can keep up with.