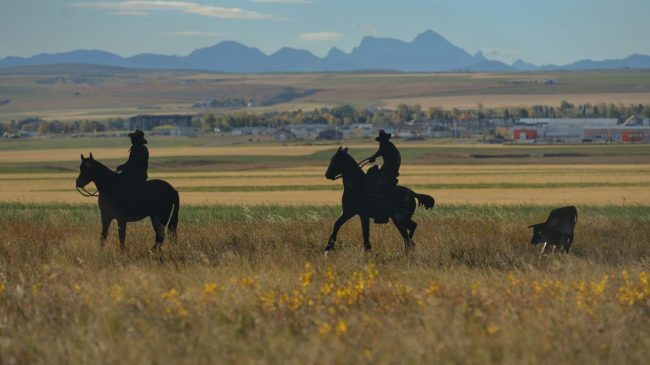 There was a wild scene on Monday morning in Oklahoma City as a cow got loose on a busy highway. The cow had broken free from a stockyard and found itself in immediate danger upon entering the crowded freeway.

So, the authorities called in the proper stops to make a surprise rescue.

A pair of cowboys were seen riding by horseback down the interstate with lassos in hand. After the cow escaped the capture attempts from those in vehicles, the two cowboys are caught storming down the street to wrangle the loose livestock.

Check out the incredible scene below as videoed by KOCO News 5 in Oklahoma City.

Cowboys wrangle a loose cow on an Oklahoma highway

COW LOOSE ON OKC HIGHWAY 🐄🤠 Sky 5 was flying over the moments when cowboys and emergency crews wrangled a cow that got loose on a busy Oklahoma City highway. https://t.co/pgZRNirP9R pic.twitter.com/NgnlgqiEEA

First, one cowboy comes streaking down the side of the road, successfully tossing a lasso around the neck of the cow. A second cowboy comes in to help save the day, wrangling the back legs.

Together, they got the loose cow free from harm and back to its stockyard.

It’s insane to see what looks to be a somewhat normal scene unfold around the drivers on the highway. In fact, many commuters seem unfazed by the roaming livestock, particularly a Fed Ex driver that continues on his or her route as the final takedown is taking place.

No excuses for late deliveries.

It looks like everyone got out safely and crisis was averted. Nice work by these real-life cowboys.