Mrs. Butterworth’s Syrup And Cream Of Wheat Are Getting Called Out Over Their ‘Racist’ Mascots Following Aunt Jemima Controversy 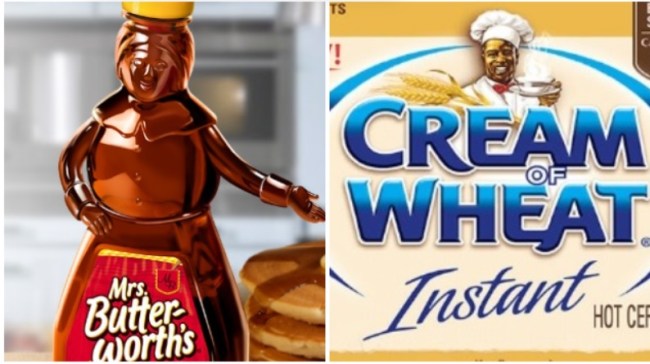 The companies that run Cream of Wheat and Mrs. Buttersworth’s syrup are both currently under pressure by social media users to rebrand their “racist” mascots following the Aunt Jemima controversy on Tuesday.

The pressure comes as the companies that represent Uncle Ben’s rice and Aunt Jemima announced their plans to rebrand the names and images of their products after many social media users noted the food products were “perpetuating harmful racial stereotypes.”

Uncle Ben’s owner Mars is planning to change the rice maker’s “brand identity” — one of several food companies planning to overhaul logos and packaging that have long been criticized for perpetuating harmful racial stereotypes.

Earlier on Wednesday, Quaker Oats announced it’s retiring the 130-year-old Aunt Jemima brand and logo. “As we work to make progress toward racial equality through several initiatives, we also must take a hard look at our portfolio of brands and ensure they reflect our values and meet our consumers’ expectations,” the Pepsi (PEP)-owned company said in a statement.

Cream of Wheat’s mascot, Rastus, is being called out over the character’s name which has historically been used as a derogatory way to refer to black men.

While y'all trending Aunt Jemima and Uncle Ben, Cream of Wheat be like… pic.twitter.com/2M5ahwVaRw

As we talk about Aunt Jemima and Uncle Ben, please don't forget about Rastus (that is the characters name, look up what Rastus means) from Cream of Wheat. pic.twitter.com/luklkfK3IF

Cream of Wheat. The “symbol” for Cream of Wheat comes from the carcicature of a Black man “Rastus”
Rastus is prejorative term associated with Africn Americans in the US. pic.twitter.com/ojRH3srOtY

Hey @BGFoodsInc , maybe now would be a good time to get rid of the Cream of Wheat guy, Rastus pic.twitter.com/8vvwGqsPdu

Conagra, the company which owns Mrs. Butterworth’s syrup said they would conduct an internal brand and product review after several social media users noted the racist origins of Mrs. Butterworth.

Conagra, which makes Mrs. Butterworth’s syrup, said it would conduct a complete brand and packaging review. Conagra noted it “can see that our packaging may be interpreted in a way that is wholly inconsistent with our values.”