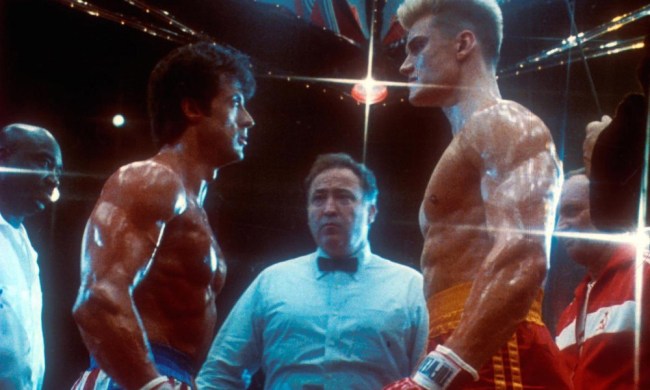 We have known that the plot of Creed 2 will be a huge boxing match between the son of Ivan Drago and the son of Apollo Creed’s son who is looking to get revenge on the death of his father in the ring at the hands of the Siberian Bull. We knew that Apollo’s son Adonis Creed would be played by Michael B. Jordan who appeared in the first Creed. Now we know who will play Ivan Drago’s son and he is a real-life boxer who is ripped and ready to play the part.

Sylvester Stallone introduced 27-year-old Romanian boxer Florian “Big Nasty” Munteanu as the one who will play Ivan Drago’s son. Munteanu not only has the boxing skills but the physique to pull off looking like the offspring of Dolph Lundgren’s character from Rocky IV. Big Nasty stands in at a towering 6’4” and is 245 pounds of sheer muscle. Whether or not his acting abilities are equal to his workout prowess is yet to be determined.

Lundgren will most likely to return as Ivan Drago to be the manager and trainer of his son and the same with Stallone coming back as Rocky Balboa to mentor Adonis. There are rumors that this will be Stallon’s final film as the beloved Rocky. They wouldn’t have 71-year-old Stallone fight 60-year-old Lundgren would they? Maybe have Rocky die in the ring at the hands of Ivan like Apollo did? The spin-off sequel will use current tensions between the U.S. and Russia to add a theme much like they did in Rocky IV‘s Cold War subplot.

Steven Caple Jr. (The Land) is the director and Cheo Hodari Coker (showrunner of Luke Cage) wrote the screenplay. The original Creed made over $170 million in the worldwide box office. Creed 2 is scheduled to hit theaters on Nov. 21, 2018.