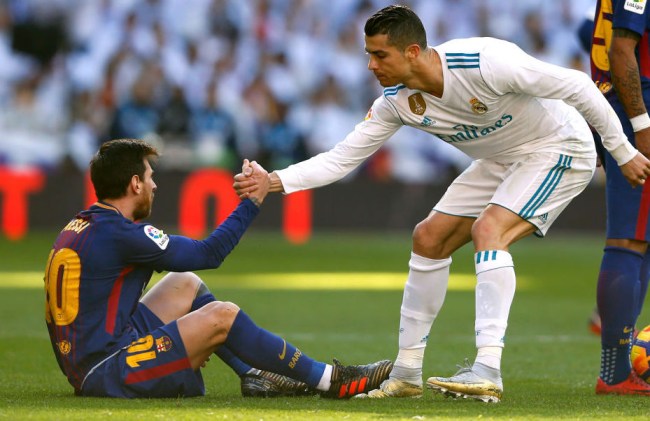 In any other year, the notion of Cristiano Ronaldo and Lionel Messi joining forces on Barcelona would be dismissed as unmitigated insanity. In terms of things you’re likely to see in this world, seeing Donald Trump reading a book or running a treadmill is more realistic than seeing Ronaldo in the red and blue of Catalonia. But in this year — the cursed year that is 2020 — anything seems possible, including the uniting of these two long-time foes.

According to reports, following a season that saw Barcelona lose La Liga to Real Madrid, the Catalonian giants are reportedly preparing a bid for 35-year-old Juventus star Cristiano Ronaldo, who spent the peak years of his career torturing Barcelona while he was with Real.

The former Real Madrid talisman could be on his way out from Juventus, after two seasons with The Old Lady – who are trying to get his huge £28m-per-year salary off their books, according to Spanish journalist Guillem Balague. He explained to the BBC that the Serie A champions are desperate to ship off Ronaldo due to his astronomical wages that they have been offering him out to Europe’s elite, including Barcelona.

Juventus’ hierarchy of sporting director Fabio Paratici, vice president Pavel Nedved and chairman Andrea Agnelli with new boss Andrea Pirlo will hold a meeting on Thursday to decide who will leave out of Ronaldo and Paulo Dybala, according to Sportmediaset. [via The Daily Mail]

What makes this news more realistic than ever are the circumstances: Barcelona knows that they only have a few more years of Messi left (the legendary Argentinian turned 33 in June), while Ronaldo is likely as cheap as he’ll ever come. For a Barcelona team looking to get over the line, adding the goal-poaching Ronaldo could give them the firepower they need to make sure Leo Messi’s final few years at the club are successful.

If doable, this deal has got to be a no-brainer for Barca, as pairing Messi and Ronaldo on the same team would create arguably the greatest footballing duo of all-time, which would pay dividends both on and off the pitch.