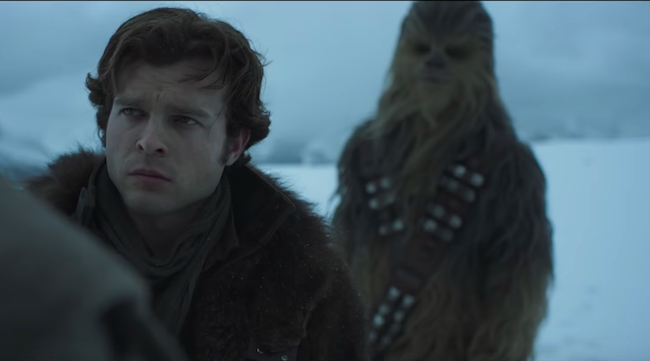 We are only seven days, 11 hours, and 24 minutes until Solo: A Star Wars Story soars into theaters. The hysteria for any Star Wars movie is always high, but the fervor for the latest episode might not be as fanboy-fueled as past films. Early reviews are out for Solo and they are not as glowing as Disney would have hoped.

Some of the mixed reviews for the movie say Solo “shoots first but totally misses the target” and plays out like “Wikipedia page” for Star Wars. While other reviews say Solo is an “energetic prequel” that is filled with “terrific performances.”

As of Thursday, Solo had a 70% critic score on Rotten Tomatoes, which is a film and TV review aggregation website. Based on 104 reviews, there were 31 critics who gave Solo a “Rotten” designation. It gets even worse when it comes to “top critics” who gave the latest Star Wars movie a 68% rating on 34 reviews.

The Rotten Tomatoes Critics Consensus: “A flawed yet fun and fast-paced space adventure, Solo: A Star Wars Story should satisfy newcomers to the saga as well as longtime fans who check their expectations at the theater door.”

While it is definitely not a horrendous assessment, this score puts Solo at one of the worst rated Star Wars movies in the franchise. Yes, Solo is in the same consideration as the much-maligned prequels. Based on the Rotten Tomatoes scoring, Solo is the lowest-rated Star Wars movie since 2002’s Attack of the Clones. The dubious distinction of being the worst-rated Star Wars film of all-time goes to The Phantom Menace.

Solo: A Star Wars Story opens in theaters on May 24 and pre-release tracking projects that the newest movie will make between $160-$170 million in its Friday through Monday debut. These reviews might make Disney angrier than a wookiee that has just lost a game of Dejarik.

Here’s how every Star Wars movie in the franchise was rated by critics.