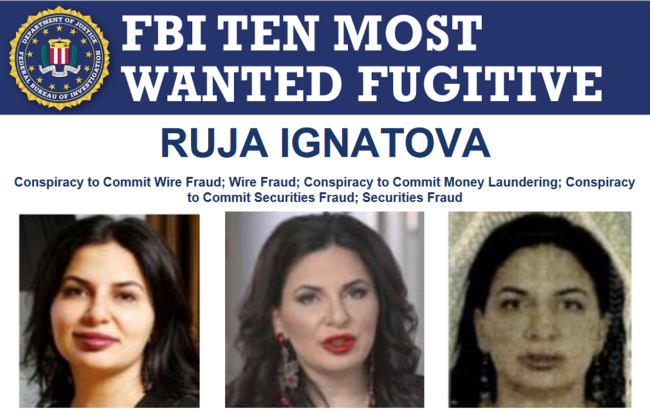 On Thursday, the FBI added Ruja Ignatova, AKA the Cryptoqueen, to the agency’s 10 Most Wanted List. She is only the 11th woman to have been placed on the FBI Ten Most Wanted Fugitives list in the 72 years the law enforcement agency has been in operation.

Ignatova is wanted for bilking millions of investors worldwide out of around $4 billion through OneCoin, a Bulgarian-based cryptocurrency that she and her partner created and launched in 2014.

OneCoin was marketed as the “Bitcoin killer” and promoted using a multi-level marketing strategy (Ponzi scheme) which urged investors to sell the cryptocurrency to their friends and family.

“OneCoin claimed to have a private blockchain,” said Special Agent Ronald Shimko, who is investigating the case out of the FBI’s New York Field Office. “This is in contrast to other virtual currencies, which have a decentralized and public blockchain. In this case, investors were just asked to trust OneCoin.”

The FBI added that unlike most cryptocurrency, the value of OneCoin was determined by the company itself rather than by market demand.

On October 12, 2017, Ignatova was charged in the U.S. District Court for the Southern District of New York and a federal warrant was issued for her arrest. Investigators believe Ignatova may have been tipped off that she was under investigation by U.S. and international authorities. She traveled from Sofia, Bulgaria, to Athens, Greece, on October 25, 2017, and has not been seen since.

“This is an old scam with a virtual twist,” said IRS Special Agent in Charge John R. Tafur. “As alleged in court documents, the cryptocurrency OneCoin was established for the sole purpose of defrauding investors. IGNATOV and IGNATOVA allegedly convinced victims to invest in OneCoin based on complete lies about the virtual currency. IRS Criminal Investigation is committed to investigating cryptocurrency scams in an effort to protect the American public and bring cryptocurrency crooks to justice.”

FBI Assistant Director-in-Charge William Sweeney Jr. said, “OneCoin was a cryptocurrency existing only in the minds of its creators and their co-conspirators. Unlike authentic cryptocurrencies, which maintain records of their investors’ transaction history, OneCoin had no real value. It offered investors no method of tracing their money, and it could not be used to purchase anything. In fact, the only ones who stood to benefit from its existence were its founders and co-conspirators.”

Ruja Ignatova, 42, who speaks English, German, and Bulgarian, according to the FBI, may be traveling on a fraudulent passport and and has known connections to Bulgaria, Germany, Russia, Greece, and the United Arab Emirates.

The FBI is offering a reward of up to $100,000 for information leading to her arrest.