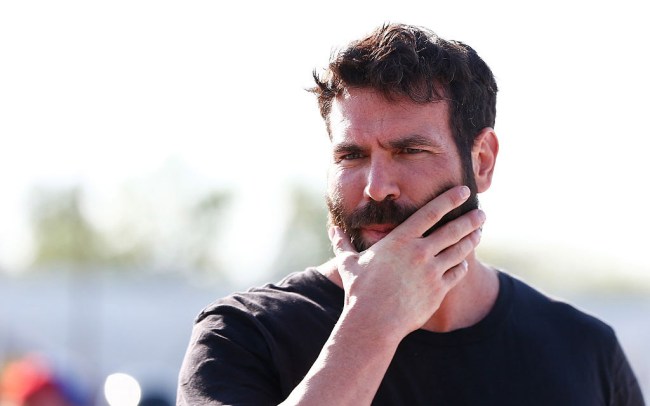 Social media often provides an illusion that you know someone when the reality is quite contrary. For example – You think a ostentatiously rich guy wouldn’t have such a hard time paying his rent.

Instagram playboy Dan Bilzerian is regarded as somewhat of a legend on the Internet thanks to his flashy social media accounts filled with guns, scantily clad women, cash money, and exotic cars. He’s the subject of a revealing profile in GQ UK, which is kinda, sorta similar to his interview with the Howard Stern show over the summer. Go read it over on GQ’s website.

In the meantime, here are a few interesting Dan Bilzerian facts that you probably didn’t know about Bilzerian from a GQ UK profile circa 2017.

He’s only 5’7″. I guess for some reason I pictured him being much taller?

One year later, however, and Bilzerian – a 5ft 7in, barrel-chested former US Navy Seal trainee and self-described “venture capitalist” who splits his time between Los Angeles and Vegas – is one of the biggest stars on the internet, and a man through whom millions now vicariously live out their fantasies in real time.

Sorta makes sense when you see him next to Manny Pacquiao:

Guns are just sort of laying all around his house without being locked up in a safe. Ummm… Responsible ownership?

If anything is going to kill Dan Bilzerian, however, those who’ve spent time with him say that it almost certainly won’t be a blocked artery. “There are guns lying around casually in literally every room in his house,” as Jonathan Grotenstein, a poker player and senior All In magazine contributor, tells GQ. “Before you walk in, his security guard takes you aside and warns you not to touch them, because they’re all chambered and loaded. You look at the guns, and you look at all these women coming and going… and it’s hard not to wonder how it’s all going to end.”

His childhood doesn’t sound, uh, all that fun, especially with his old man, who spent time in prison for securities and tax fraud for his involvement in corporate takeovers:

Bilzerian, however, had a lonely and often stressful childhood.

His dad, an elaborately mustachioed and sideburned former juvenile delinquent who’d fought in Vietnam and been a disruptive presence at Harvard Business School, was absent much of the time, working on exotic deals. And when the old man was around, his stubborn, take-no-prisoners attitude tended to make life difficult – such as when he sued his son’s Little League baseball team for slander in an argument over a $5,000 donation, only for the case later to be dismissed.

“Basically I didn’t get a ton of attention as a kid,” Bilzerian has admitted, “I guess that’s why I’m such a flashy lunatic.”

As the car pulled up to the gates, however, the young Bilzerian realised something was wrong. That’s when his dad broke the news: he was going to prison. In a case beyond a primary schooler’s understanding, Bilzerian Sr had been found guilty on nine counts of stock and tax fraud, mostly related to a classic pump-and-dump operation that involved “parking” investments in public companies, staging hostile takeover bids, then offloading the investments as the share prices rocketed. The judge in the case said that the “lure of money” had caused Bilzerian Sr “to lose… proper perspective”.

With his dad behind bars, Bilzerian faced ridicule from his classmates, and he began to show his own contempt for authority, getting expelled from two schools in one year, and ending up in a military academy under the care of drill instructors. After that, the family moved more than 2,000 miles northwest to Utah, where Bilzerian Sr, out on parole, bought a new company.

One of the most well-known Dan Bilerian facts is that he was making a SHIT TON of money in college. He enrolled in the University of Florida by playing poker:

Bilzerian says he learned to play poker at the University of Florida, where he enrolled after the Navy to study business and criminology – funded by a $6,000-a-month “disability allowance as a veteran” that he qualified for due to his injuries and honourable discharge.

By his second year, he’d gone broke, apparently with no access to the assets of which he was a beneficiary. Forced to sell his guns, Bilzerian returned to the poker table with a near-pathological focus. “You have to go broke to respect the money,” he has said of his losses. “And I had a style where I could make a lot of money if I had self-control.”

The way Bilzerian tells it, he turned the $750 he had left over from liquidating his possessions into $10,000. Then he bought a one-way ticket to Las Vegas and turned that $10,000 into $187,000. With this sizeable bankroll, he then went back to university, more determined than ever, and resumed his studies while continuing to hone his skills in “cash games” after classes. (The potential winnings in cash games are essentially unlimited, whereas tournaments have fixed buy-ins and fixed prizes.)

Bilzerian never did finish his degree.

His first big poker game did NOT go well:

Bilzerian was 27 when he first came to the attention of the high-stakes poker crowd. It was 2007, and he’d booked himself into Harveys Lake Tahoe, a 740-room hotel on the border of California and Nevada, with a suitcase filled with $100,000 in used bank notes. “He was not playing wild at all,” recalled Todd “DanDruff” Witteles, a well-known player, when describing his first game with Bilzerian to Poker News, a website owned by Antanas Guogo, a Lithuanian-Australian businessman known as the “Australian Airbag” and the “Mouth From Down Under”.

“The game was very nitty [no one betting much] and he basically wanted everyone else to start playing loose before he did,” added Witteles. “I think he was just mad that people saw him as the rich fish [bad player] from whom they could extract money. Not surprisingly, the game stayed tight, and he finally got up and left.”

He plays loose and aggressively in private games, however:

Meanwhile, in private cash games, Bilzerian became known for playing “loose aggressive” – in other words, betting big and betting often, to the delight of his ultra-wealthy fellow players. In one moment of madness, he flipped a coin for $2.3m (£1.4m) of chips… And lost.

Before long, Bilzerian had gone from high stakes to so-called “nosebleed stakes” at games hosted at his Los Angeles home with an assortment of billionaires and celebrity friends, including the Spider-Man actor Tobey Maguire, the film director Nick Cassavetes, and the action star Mark Wahlberg.

He told Howard Stern last year that he was worth around $100 million. Not everyone thinks he has as much money as he acts like he has, however. Once again, Dan Bilzerian facts get murky.

Few are convinced of the accuracy of those numbers, however.

“Does he have $100m?” asks Jonathan Grotenstein, the poker player who visited his home in LA recently. “No, I don’t think he has access to that kind of money. He plays poker at really, really high stakes, but he’s not playing in the top games with guys like Tom Dwan, or going to Macau, where million-dollar pots are won and lost all the time. I think Dan is more about using poker as part of an image that he’s trying to create, and I think there are a lot of people out there who will lend him a private jet, or let him test drive a ridiculous car.”

He sued Mark Wahlberg over not getting enough screen time in Lone Survivor, which he invested $1 million.

Bilzerian’s talent for calculated risk is also beyond question. When he invested $1m in the Mark Wahlberg war film Lone Survivor, for example, it was conditional upon him getting at least eight minutes of screen time and 80 words of dialogue. When his role was cut to almost nothing, he sued, revealing a contract that read more like a hedge-fund position than a Hollywood deal. And yet in the end, having reaped all the publicity, he dropped his case, arguing that the film had been so successful, he didn’t want his money back – because he’d made $1.5m on the back end.

He made a cool $1 million by staking Jay Farber in the World Series of Poker, too:

Similarly astute was his decision to put up 20 per cent of the $10,000 buy-in for an up-and-coming poker star, Jay Farber, at the 2013 World Series of Poker. When Farber won $5m, Bilzerian was able to claim a $1m cut. What’s more: he got to sit in the front row, getting his beard stroked by a model on live television.

Go read the full article over at GQ UK….