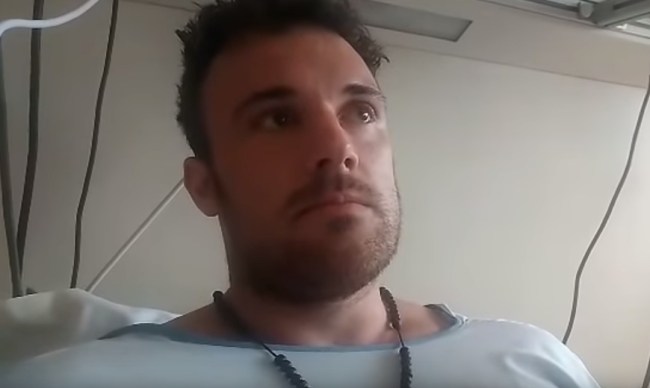 A bodybuilder is battling a terrifying health crisis as he fights to save his leg after taking bad steroids. YouTube and Instagram personality Dan the Bodybuilder in Thailand needs multiple expensive surgeries otherwise he might lose his leg from a gruesome flesh-eating bacterial infection.

Daniel Marquis is a 28-year-old bodybuilder from California and the man behind the Dan the Bodybuilder in Thailand social media personality. As his name suggests, he was living in Thailand but recently went to Colombia. That is where Marquis injected himself with contaminated steroids, which caused his leg to get a nasty infection. Dan received surgery that cost him $10,000 to remove the infection, but it failed and the results are frightening.

“I have developed a life-threatening necrosis in my leg from a shot of infected gear,” said Marquis. “Gear” is a slang term for steroids. Dan apparently used ugl gear or underground lab-created steroids that are not dispensed from a pharmacy.

Necrosis is a potentially dangerous and sometimes fatal bacterial infection that kills off cells or tissue by autolysis, which is the destruction of a cell because of self-digestion by way of its own enzymes. Necrosis can be caused by a number of things such as a small cut, trauma to the cells or tissues, toxins, and an infection.

“I am currently in the hospital alone in Colombia. I don’t have health insurance and 3 days ago I had surgery to remove the necrotic flesh that is spreading inside of my leg,” Marquis said. “The surgery was a failure and also simultaneously bankrupted me. The incision in my leg has burst open and There is now new necrotic dying flesh growing in my leg.” Marquis said that he will need at least two more, even more expensive operations, to try to save his leg from the flesh-eating bacteria.

Marquis has set up a GoFundMe page where he is attempting to raise $30,000 for his future surgeries and health care. He has raised over $18,000 at the time of publication. “In this time of incredible physical and emotional suffering any donation no matter how small to help me to afford my upcoming surgeries to save my leg is something I will be eternally grateful for,” Dan the Bodybuilder in Thailand wrote.

You can view his crowdfund campaign HERE, but the page shares very graphic and very disturbing images of his necrosis infection rotting away his skin. The dangers of dirty and clean steroids are very real as you see with Dan Marquis, so please be careful out there.

Here is a YouTube video of Dan the Bodybuilder in Thailand during happier times.