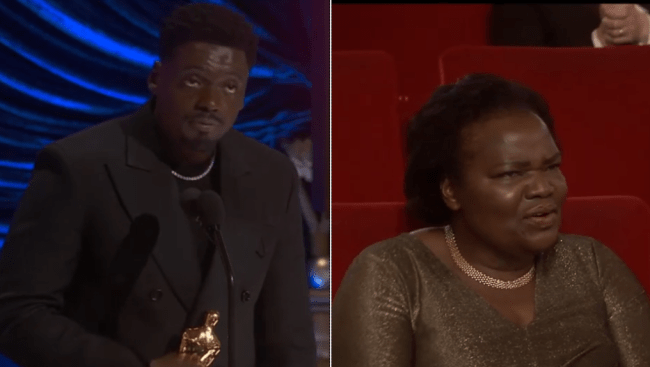 Daniel Kaluuya’s mom probably wants to kill him right now despite the fact that he just won an Oscar.

On Sunday night, Kaluuya won the Academy Award for Best Supporting Actor for his portrayal of Fred Hampton in the movie Judas And The Black Messiah.

During his Oscars acceptance speech, Kaluuya shouted out his parents for having sex and creating him. The camera immediately panned to Kaluuya’s mom and sister who were in attendance at the Oscars and Kaluuya’s mom mouthed “what is he talking about?” while his sister was completely embarrassed.

Let’s celebrate life…we’re breathing, we’re walking, it’s incredible. My mom and my dad they had sex, it’s amazing and I’m here. I’m so happy to be alive and I’m celebrating that tonight

"My mom met my dad. They had sex. It's amazing." — Daniel Kaluuya #Oscars pic.twitter.com/IZBjUiH0i3

Here's Daniel Kaluuya's mom and sister reacting to him saying "My mom and my dad…they had sex. It's amazing! I'm here!" at the end of his Oscar speech pic.twitter.com/4nLZxY0Jwc

Daniel Kaluuya ‘s mom literally said “what is he talking about” #Oscars pic.twitter.com/vrGHBNLn7a