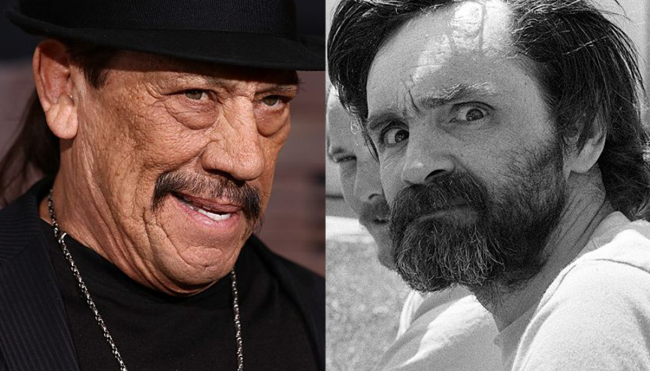 Danny Trejo has appeared in over 400 projects since he began to pursue a career in acting in the 1980s, which was a bit of a pivot for a guy who spent the first few decades of his life in and out of prison after the Los Angeles native joined a gang in the Echo Park neighborhood where he was raised at the age of 12.

The actor had plenty of brushes at an early age, including one incident that landed him in the Los Angeles County Jail in 1961 when he was still a teenager. Trejo had developed an addiction to heroin prior to his incarceration, and while he had trouble feeding his habit considering the circumstances, he managed to find a suitable stopgap in the form of a fellow inmate: a guy by the name of Charles Manson.

Like Trejo, Manson had managed to put together a pretty sizeable rap sheet by the time the two men found themselves in the same correctional facility. According to Fox News, the man who would eventually become the patriarch of the Manson Family approached Trejo in search of an ally who could protect him, which the actor agreed to do after taking pity on the “greasy, dirty, scrawny” prisoner.

Manson didn’t have any money to offer in return, but Trejo recalls he claimed he could compensate him and a couple of other guys who’d agreed to keep him safe by using hypnosis to convince them they were high—a promise he was apparently able to fulfill:

“The dude sat us down and told us to close our eyes. For 15 minutes, in great detail, he walked us through the process of copping the dope, finding a place to fix, cooking the heroin in a spoon, drawing it into a needle, and sticking it in our veins.

Even before I fake-fixed, I could taste it in my mouth. Any junkie knows what that is like. By the time he described it hitting my bloodstream, I felt the warmth flowing through my body.”