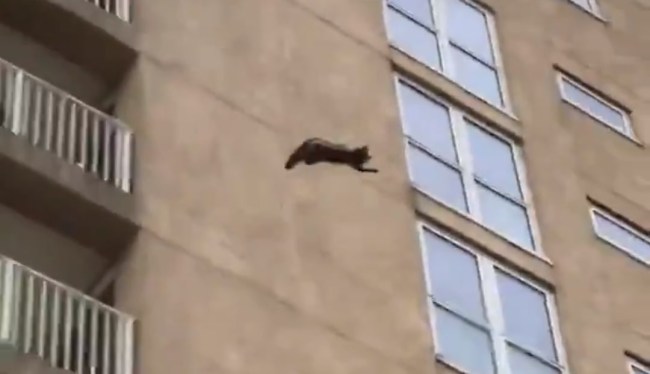 The raccoon has a scientific name of procyon lotor, which is neo-Latin for “before-dog washer.” The word “raccoon” is an adaptation of what the Powhatan American Indian tribe from the Virginia area described as “animal that scratches with its hands.” Raccoons are also known as “trash pandas.” Now for crash panda.

A brave or maniac raccoon climbed a building in Ocean City, New Jersey on Friday. The little dude made it nine stories up the side of the building and seemed to say, “Fuck it.” Video captured by Micha Rea, a South Carolina resident, saw the coon leap from the building and plummet all the way back to the Earth. Micha almost messed up the money shot because she was too busy recording the boring bicyclists on the boardwalk instead of the suicidal coon.

DAREDEVIL RACCOON: Incredible video shows a raccoon climbing roughly nine stories up a building off the Ocean City Boardwalk. It then appears to turn around and jump from the building, spiraling toward the ground. Then it gets up and walks away…

Thankfully the raccoon lands on some soft sand and sprints away like he didn’t just fall nine stories. What set this raccoon over the edge? Did his wife leave him and took the kids? Did his favorite garbage can close down? Was the nocturnal life torturing him?

This individual explained the scientific reasons why the daredevil raccoon survived his crazy fall.

Racoon was very smart, it spread his body out causing drag, if you freeze it right before it lands, it puts all 4 feet down and muscles were ready to dampen fall. Similar to cats, neither animals terminal velocity is anywhere near as high as a human and can survive high falls.

People had some astute observations about the flying raccoon.

Raccoons are the crackheads of the animal kingdom

After you enhance the image of the raccoon leaping, it all makes sense how he survived… pic.twitter.com/1HcbcO8iaD

This is what I saw 😂 pic.twitter.com/wj74qevEhR

This is still a better action movie than Battlefield Earth.