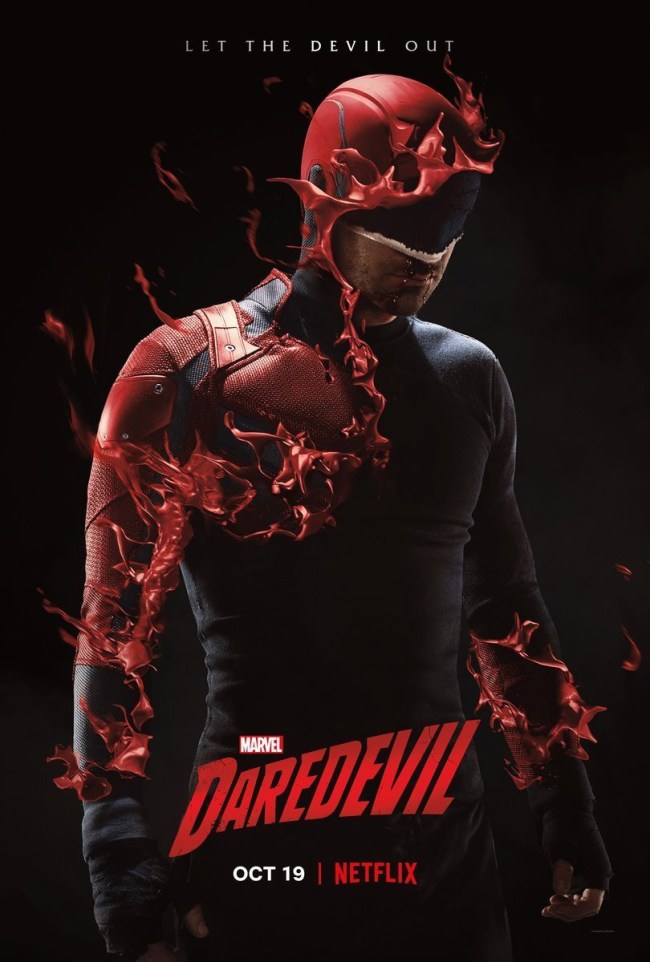 Unlike poor Iron Fist Danny Rand, Matt Murdock’s Daredevil doesn’t seem to be in any danger of being canned by Netflix.

On the contrary, Marvel’s Daredevil is all set to drop on October 19th with 13 brand-spanking new episodes straight out of Hell’s Kitchen.

So what do we need to know?

Well, according to one synopsis, “When Wilson Fisk is released from prison, Matt Murdock must decide between hiding from the world or embracing his life as a hero vigilante.”

As you may recall, the last time we saw Matt Murdock was at the end of The Defenders, when everyone just assumed that he had died. That result will lead into a new season inspired by the story arc of the “Born Again” and “Guardian Devil” comic series.

According to Vinnie Mancuso of Collider, who visited the set of Daredevil season 3, here are some things to look for, without giving too much away…

• No cameos from Iron Fist, Jessica Jones, Luke Cage, or The Punisher.
• Matt Murdock begins the season “physically incapable” of being the Daredevil.
• Joanne Whalley joins the cast as Sister Maggie, a nun who helped raise Matt when he was an orphan.
• Matt goes back to the black costume because “it’s almost like he’s lost that privilege,” said the man who plays him, Charlie Cox.
• The love of Wilson Fisk’s life, Vanessa, still has an important role in the story.
• We will get to learn a lot more about Karen Page’s backstory, occasionally through flashbacks.
• We will also learn more about Foggy’s family and go deeper into his backstory.

New Executive Producer and Showrunner Erik Oleson (Unforgettable, Arrow) commented to Marvel.com, “I think, honestly the events of [Marvel’s The Defenders] and his inner fear, which he’s not fully conscious of, among other things, drive Matt at the very beginning of the season to regress into the teachings of Stick and the ‘solo warrior’ mantra, like ‘I cannot attach to others because that will harm them.’ And that is the emotional place that Matt starts this season.”

As for the return of Wilson Fisk, Oleson remarked, “He’s seen as a villain by the city… he has designs on undoing the way that the world sees him, and that is something that will play across the season.”

He also noted, “Karen and Foggy are messed up by the death of Matt. Karen doesn’t think it’s possible, Foggy thinks he’s dead, and they’re screwed up.”

Charlie Cox added, “The first thing that takes a massive hit is his faith. Something Erik and I talked about was how his attitude changed going into Season 3. We landed on two elements: One of them is Matt’s relationship towards God and his faith. He believes in a punishing God now, almost vindictive. He’s that angry and let down. If you’re someone who has his powers taken away, after believing [they were a] gift of God. He’s gone from Matt Murdock with the Daredevil alter ego into now Daredevil with a slight Matt Murdock. It brings a recklessness to his character.”

A recklessness that would have cost Matt Murdock a boatload of money in medical bills were it not for one very Good Superhero Samaritan in Claire Temple.

And that folks, is “Daredevil Season 3: 101.” And here’s “Matt Murdock | Marvel 101” to fully complete your preparation.