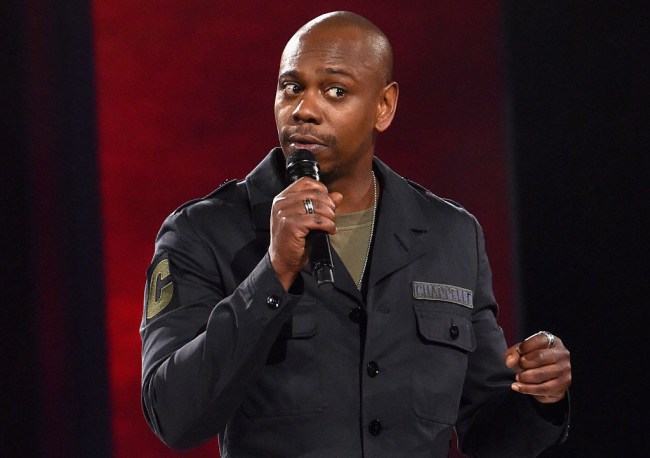 There are perhaps no more than two or three celebrities that would leave me starstruck if I was lucky enough to meet them. You know, not counting drooling all over myself if I were to ever bump into Emily Ratajkowski at a bar, or whatever.

Off the top of my head — literally, as I sit at my desk ripping my post-workout/pre-breakfast morning bowl — I can only think of three (in no particular order):

Obviously, the reason you even clicked on this article is because of Chappelle, so we’re gonna focus on him. I’ve officially entered my late 20s, meaning Dave Chappelle has been in my life for close to two decades now, and for all of those years, he’s always held this sort of aura about him, whether it be through his obvious comedic genius or his more mysterious personal life (famously passing on a $50 million contract from Comedy Central to instead go decompress in South Africa). Prior to his comeback five or six years ago, there were plenty of us who wondered whether we’d seen the last of the greatest comedian alive.

Chappelle’s been back at the forefront of the pop-cultural consciousness for some time now, so much so that it feels like this is how it always was.  But lest we not forget that, at a time, the iconic stand-up was being pushed to the fringes of society but those who were ready to simply dismiss him as “crazy”.

This brings us to the point of this here article: a clip from Chappelle’s appearance from Inside The Actor’s Studio from back in 2006 where he discussed the perils of labeling someone as “crazy” is going viral as his friend, Kanye West, appears to be going through some sort of very public mental health episode.

Yo people talking about Kanye really made me think about what Dave Chappell said years ago. JUST LISTEN to what he says at the end ❗️ pic.twitter.com/r8WXDhe6pw

As always, therein lies the genius of Dave Chappelle — his ability to breakdown complex societal structures and communicate them to the common folk like you and I in an entertaining way. If you didn’t know before, you know now: Chappelle isn’t a comedian, he’s a hilarious philosopher.