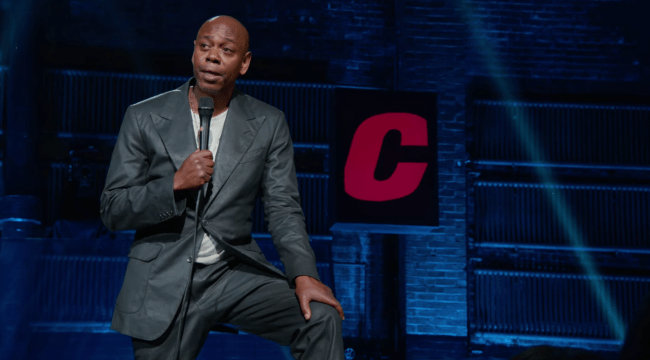 During his latest — and according to the man himself, his final — Netflix stand-up special, Dave Chappelle, once again, broached the topic of the LGBTQ community. Chappelle, of course, received significant backlash for his jokes about LGBTQ people back in his 2019 special Sticks & Stones.

Within the first ten minutes of his set in The Closer,  which hit Netflix on Tuesday, October 5, Chappelle states that he would like to address the LGBTQ community and the comments he has made about them in recent years.

“I came here tonight, because this body of work that I’ve done on Netflix, I’m going to complete. All the questions that you might have had about all these jokes I’ve said the last few years, I hope to answer tonight. And I’d like to start by addressing the LGBTQ community,” Chappelle begins, before launching into the crux of his joke.

“I want every member of that community to know that I come here tonight in peace, and I hope to negotiate the release of DaBaby.”

Chappelle is, of course, referencing the fact that the career of Charolette rapper DaBaby has virtually fallen off a cliff after the 29-year-old rapper made disgusting, homophobic comments over the Summer that resulted in his name removed from festival line-ups and his songs no longer being played on the radio.

“DaBaby was the number one streaming artist until a couple of weeks ago. He took a nasty spill on stage and said some wild stuff about the LGTBQ community during a concert in Florida. Now, you know even I go heard in the paint, but even I saw that s–t and was like ‘God damn, DaBaby!’. Ooohhh, he pushed the button, didn’t he? He pushed the button — punched the LGTBQ community right in the AIDS. Can’t do that,” Chappelle continued.

“But I do believe that the kid made a very egregious mistake, I will acknowledge that, but a lot of the LGBTQ community doesn’t know DaBaby’s history, he’s a wild guy.  He once shot a n—a and killed him in Walmart. This is true, Google it: DaBaby shot and killed a n—a in Walmart in North Carolina… nothing bad happened to his career.”

At this point, laughter and applause breaks out in the audience as Chappelle cracks a slight grin and asks, “Do you see where I’m going with this?”

“In our country, you can shoot and kill a n—a, but you better not hurt a gay person’s feelings. And this is precisely the disparity that I wish to discuss.”

Obviously, Chappelle’s latest comments are certain to ruffle some feathers, but then again, that largely seems to be his goal these days. Such are the perks of being the greatest stand-up comedian of your generation.

The Closer, and all of Dave Chappelle’s Netflix stand-up specials — The Age of Spin, Deep In The Heart of Texas, Equanimity, The Bird Revelation, Sticks & Stones, and 8:46 — are currently streaming.