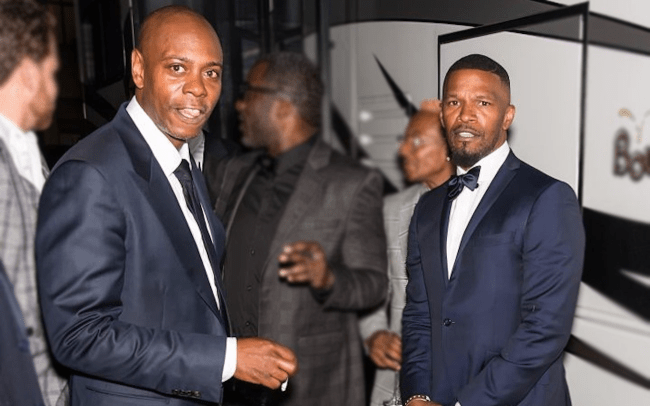 While Dave Chappelle may have been physically attacked at the Netflix Is A Joke festival on Tuesday night, his reputation has only been enhanced as the legendary stand-up comedian not only returned to the stage following the scary incident but pretty much had the perfect response to what unfolded.

During his set at the Hollywood Bowl on Tuesday night, Chappelle, 48, was attacked when an unidentified assailant rushed the stage and tackled the comedian. The attacker, who was promptly arrested, was reportedly in possession of a fake semi-automatic pistol that had a real knife attached to it.

According to reports from the scene, Chappelle’s entourage, including the likes of Jamie Foxx and Busta Rhymes, quickly intervened and likely prevented Chappelle from suffering any real harm.

Following the incident, Chappelle returned to the stage and addressed what unfolded, while also praising his friends Jamie and Busta for having his back. You can read a full transcription of Chappelle’s comments below, too:

Here is a video of the aftermath. #DaveChappelle handled this like a champ! #HollywoodBowl pic.twitter.com/0xaBpWsbrT

“Oh, now everybody comes out for the curtain call?!” Chappelle began. “Shout out to Jamie Foxx, by the way! Jamie, where you at?!” Make some noise for Foxx. Whenever you’re in trouble, Jamie Foxx will show up in a sheriff’s hat,” Chappelle said before Foxx walked on stage.

“I thought that was part of the show, I didn’t know what the f–k was…” an exasperated Foxx said.

“I grabbed the back of that n—-s head — his hair was spongey! Absorbant!” Chappelle quipped.

“Listen, I just want to say that I’ve had an incredible time. This man is an absolute genius, we got to make sure we protect him at all times. This is what it’s about. For every comedian that comes out here, this means everything. You’re a genius, you’re a legend, I enjoyed myself thoroughly, and we’re not going to let nothing happen to you! Give it up!” Foxx concluded.

“I’ve been doing this for 35 years — I just stomped a n—a backstage. Always wanted to do that. I see Busta Rhymes over there like ‘That’s how you do it, dog,” Chappelle joked.

Jamie Foxx put it perfectly: we must protect Dave Chappelle

RELATED: Dave Chappelle Rolled Up To A Local City Council Meeting To Son The Board Over Affordable Housing (Video)