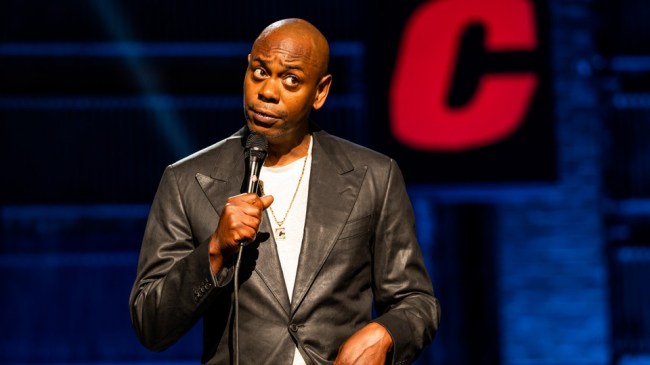 Despite the backlash his Netflix special The Closer has been receiving, legendary stand-up comedian Dave Chappelle has remained full steam ahead when it comes to his jokes about the LGBTQ community. While Chappelle has been making jokes about the LGBTQ community for a few years now, his most recent Netflix special — which was released on October 5 — has created more backlash than ever. In fact, in the weeks following the release of The Closer, there was upheaval within Netflix as some employees protested, calling on CEO Ted Sarandos to pull the special from the streamer.

According to reports, during a recent screening of his documentary Untitled at Madison Square Garden in New York City, Chappelle continued to make the type of jokes that have spurred protests at both Netflix and his former high school, which recently canceled a fundraising event due to the cultural climate around the comedian. Chappelle has been touring around the country to unveil the documentary, which details the stand-up shows he put on in rural Ohio during COVID quarantine in the summer of 2020.

At a Monday night screening for his new documentary project Untitled, and fresh off the heels of his highly controversial Netflix stand-up special The Closer, the self-proclaimed uncancelled comedian let a few more transphobic jokes fly.

The 48-year-old had a running gag about pronouns, said the f-slur, joked about claiming to identify as a woman to get a cushier prison placement, and waved off a previous declaration that he would stop making jokes about the LGBTQ+ community, saying that rule only counts when cameras are rolling. [via The Daily Beast]

At this point, it feels like Chappelle is continuing to tell jokes that trigger people just to prove a point, which is about as Chappelle as it gets. In fact, he seems to be reveling in the attempts to cancel him.

“Week four of being canceled, it’s crazy,” Chappelle said during the MSG set. Chappelle’s next scheduled event is a screening of Untitled tonight, Tuesday, November 23, at the Capital One Arena in Washington D.C.