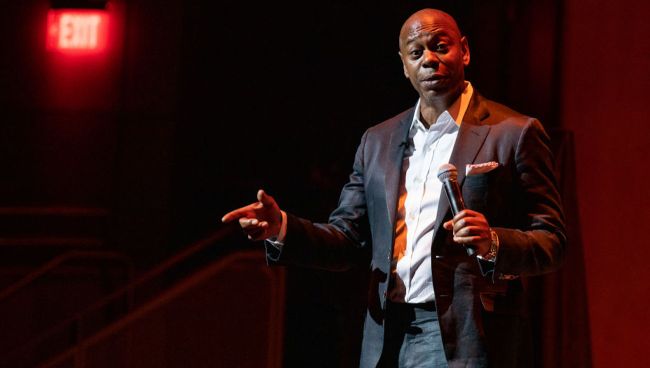 Netflix has stuck by Dave Chappelle through every inch of controversy that surrounded him in 2021 following the release of his special “The Closer” and the streamer continues to do so this year, as they’ve released a new “stand-up” special titled What’s in a Name?.

The reason that I put “stand-up” in quotations is that the 40-minute-long video actually features Chappelle speaking at his former high school, the Duke Ellington School of the Arts, following backlash to the school’s decision to rename their theater after him.

However, while speaking at the school on June 20th, Chappelle asked for the theater to be named the Theater for Artistic Freedom and Expression.

The streamer released a 40-minute video titled What’s in a Name? being deemed a stand-up special on the Netflix homepage, capturing Chappelle’s speech at his former high school for what should have been a theater renaming ceremony.

In What’s in a Name?, Chappelle calls his previous controversial Netflix stand-up special “The Closer” a misunderstood “masterpiece” and said he was “sincerely hurt” by the Duke Ellington School students after a tense Q&A held in November 2021 during which the adolescents voiced their concerns over his transphobic comments. [via IndieWire]

At one point during the special, Chappelle states that public backlash to things he says only further drives him to say more things like it:

“The more you say I can’t say something, the more urgent it is for me to say it,” Chappelle explained. “It has nothing to do with what you’re saying I can’t say. It has everything to do with my right and my freedom of artistic expression. It’s worth protecting for me, and it’s worth protecting for everyone else who endeavors in our noble professions. These kids didn’t understand that they were instruments of oppression.”

The release of What’s in a Name? continues Netflix’s lucrative partnership with the iconic comedian, which first began with 2017’s The Age of Spin. In addition to What’s in a Name? and The Age of Spin, Netflix has released six other Chappelle specials: Deep in the Heart of Texas, Equanimity, The Bird Revelation, Sticks & Stones, 8:46, and The Closer.