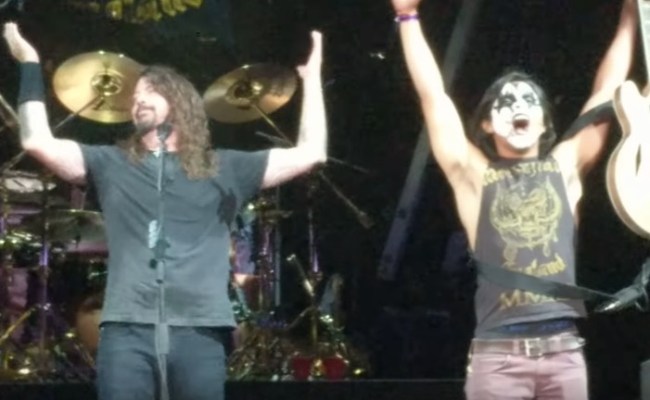 During the Austin, Texas concert on 4/18 Foo Fighters’ frontman Dave Grohl read a fan’s sign in the crowd and decided to pull him on stage to play ‘Monkeywrench’ with the band. That fan was a local Austinite who goes by the name ‘KISS Guy’ (real name Yayo Sanchez) and he proceeded to absolutely shred on the guitar.

This isn’t the first time Dave Grohl has pulled a fan out of the crowd to play with the Foo Fighters but KISS Guy was so good that he actually caused Dave Grohl to forget the lyrics to his own song! This is a pretty epic moment for everyone involved:

Taking a quick scroll through KISS Guy/Yayo Sanchez’s Instagram page it appears as if this dude’s also a badass drummer. This was an epic moment for KISS Guy and the Foo Fighters but I would’ve loved to see him hop on the drums too and take the crowd to another level.

I also wonder what the aftermath of situations like this is? Does Dave Grohl ever invite the fan backstage to party with the Foo Fighters? Does a musician ever find his/her real-life big break when they’re pulled on stage to play with a band? Or do they just go viral on YouTube overnight and go back to their living life the next day?