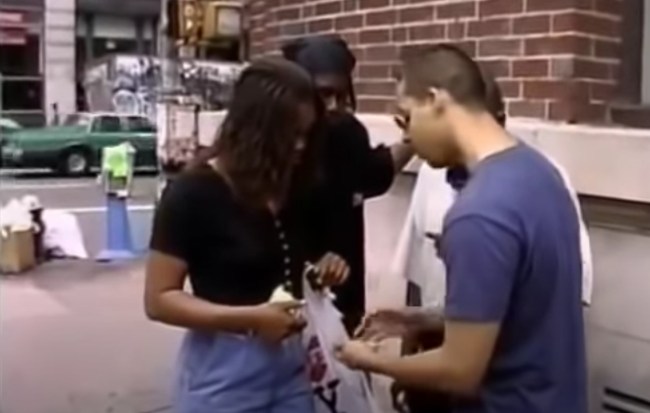 It’s kind of hard to process that there was a time in life when David Blaine wasn’t a famous magician. I’ve watched each and every one of his magic specials throughout the years and I’ve seen the clips of him performing magic as a kid, and heard him discuss his childhood and upbringing with Alec Baldwin on the Here’s The Thing podcast but the guy’s been a world-famous musician for as long as I can remember, that’s just who David Blaine is to me.

This unearthed clip made its way to YouTube a few years ago and it’s just now making the rounds. This is said to be the pilot that David Blaine filmed himself in order to convince TV executives to give him a Street Magic special which was the catalyst that jumpstarted his career and put him on the path to being one of if not THE most famous magicians in the world.

This clip has it all. The throwback sunglasses he’s wearing that look straight out of the movie Hackers. Packed NYC avenues with models of cars I haven’t seen in decades. The outfits which everyone left in the 90s. And people having their minds blown to absolute shreds by David Blaine’s tricks on the street.

It’s easy to see why a smart TV executive would hand him the keys to a new special after seeing this footage. There is some profanity in this clip so be prepared for that if that’s something you care about either way.

His first special, David Blaine: Street Magic, premiered on ABC back on May 19, 1997. This clip of him performing magic on the street in NYC was filmed two years prior to that. Blaine is consistently named to the annual list of the world’s highest-paid musicians and has an estimated net worth somewhere in the realm of $40 million though some estimate it’s a lot higher than that.

Blaine’s YouTube channel has been pretty active lately with clips being uploaded every few days. Here’s one of Jamie Foxx and Olivia Munn losing their minds, a video he uploaded just yesterday:

For more David Blaine magic tricks you can click that link to check out our magic archives around here.